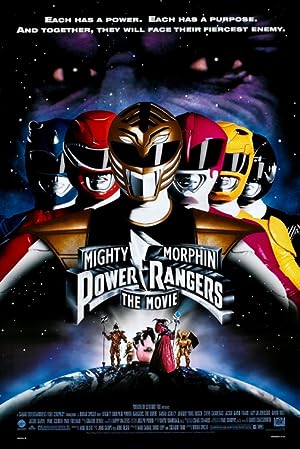 Synopsis: Six teenagers Tommy, Kimberly, Adam, Billy, Rocky and Aisha have discovered the power to fight the forces of evil. A giant egg is unearthed in Angel Grove. Lord Zedd and Rita Repulsa investigate the egg, and release the creature inside - Ivan Ooze, whom Zordon had trapped him inside the egg six thousand years ago. Once released, Ooze left to seek revenge on Zordon. And now Zordon in his crystalline deathbed is dying because he has no power, without the power then Zordon of Eltar will never existed. Now the fate of the universe is in their hands. But this time the Power Rangers head for a distant planet to meet up with a bikini-clad warrior babe named Dulcea who imparts ancient wisdom and power. But now that they have their powers back and becomes Power Rangers once more they will now get back to business and defeat Ivan Ooze at all costs.
Genre: Action, Adventure, Family
Director(s): Bryan Spicer
Actors: Karan Ashley, Johnny Yong Bosch, Steve Cardenas, Jason David Frank
Production: 20th Century Fox Film Corporation
1 nomination.

Whoo-hoo! - Come on, we're outta here! - Easy, Rocky. All right, guys, we're 15 seconds from the drop zone. All right, pinheads, the Stealth Eagle's about to fly. Ditto for the Swooping Swallow. Well, lead on, flyboys. - That's a lotta air! - After you, Skull! What are you? Crazy? This was your idea! Hey, guys. You might wanna slip those on. Good idea. We're three seconds away from the target zone. Aisha, you're on! Yes! Stylin'! On your tail! Whoo! All systems go! Banzai! Whoo-hoo! - Show 'em your stuff. - You got it. Surf's up! Whoo-hoo! Yeah! Catch you on the flip side.

With the arrival of Ryan"s Comet two days away, the Angel Grove jump-a-thon will breathe new life into the old observatory. Tickets to see the comet are at the Fire Department booth. Now, folks, raise your eyes to the skies, cos here comes the team from Angel Grove High! All right, Dad, pay close attention. This is how the pros do it. - I didn't do so bad. - You landed in the parking lot. - It was embarrassing. - Well... The first of the team is beginning his final approach. It"s Adam! As he rounds the turn, he looks awful low... but he pulls up just in time and hits the target dead centre. Right behind him is skydiver Billy... who manages a perfect landing! Skydiver number three is Kimberly! Her landing is flawless! And here comes Rocky... who lands right on target! Here comes Aisha! She makes it a perfect five out of five landing and ties the 1986 record. So now it"s all up to Tommy Oliver. Can he make it six for six? Yeah! Go, Tommy! He"s making his final approach. Looks a bit wide, but still OK. Almost to the ground now. Can he do it? He does! The Angel Grove team sets a new city record! Way to go, guys! - Let's go. - OK. Remember, folks, Ryan"s Comet will be passing in just two days. - Looking good up there. - Thanks. Maybe next time you can join us. Really? Could I? Yeah, well, we'll talk about that, Fred... in about 10 or 12 years, all right? Congratulations, Tommy. The observatory just got a new lease on life. - Yeah. Thanks, man. Awesome. - Ryan's Comet is passing over in two days! - Guys, we did it! - That was awesome, Tommy. - Wonderful. - Thanks, guys. You too, man. - Hey, has anybody seen Bulk and Skull? Ernie's is serving a free dessert with lunch. They probably landed on the roof. Hurry up. We're runnin' out of fuel. I gotta be the eagle. I'm gonna be the eagle! Be the swallow! - Be the swallow. - Come on, baby! Let go of me! I want my mommy! Rock and roll!

Hey, this doesn't look like the target landing zone! Where's the free food? You idiot! Your screaming threw off the Stealth Eagle's sense of direction. Stealth Eagle? Lame duck is more like it. - Hey! - Uh-oh. - You guys, what do you think you're doing? - Uh... We're from the Angel Grove Building Inspector's office. Yeah. That building's supposed to be over there! And what's that man doing without proper foot protection? - Who's in charge around here, huh? - Huh? - Huh? - Huh? Hey, Dave! Come and have a look at this. Go on, Dave. - That was a close one. - Uh-huh. - You hungry? - Always. What in the world is this? It sure as heck ain't DWP. Let's get a crane in here. OK, take it up! Incredible. What do you think it is? No... idea. Aaaaarrgghh! John, you all right? Hey, guys, let's get somethin' to eat. Hang on. Let's go over there. - What's up, Alpha? - Rangers, Zordon needs you. It"s urgent. We're on our way. Aye-yai-yai-yai! The subtronic interphasers are short-circuiting. I have to find a way to alternate the frequency modulators. What's goin' on? A massive surge of evil energy is overloading our sensors. Aye-yai-yai-yai-yai! Rangers, you must act swiftly. - The planet is in grave danger. - Danger from what? known as Ivan Ooze ruled the world with a reign of unparalleled terror. He was on the verge of completing construction of his ultimate weapons: the Ecto-Morphicon Titans, twin machines capable of enslaving the entire universe. What happened to him? A group of warriors like yourselves lured him to into a hyperlock chamber and buried him deep underground. But now the chamber has been accidentally uncovered. You must return it to the depths before it is opened and Ivan is released. His Ecto-Morphicons were buried near the chamber. If Ivan escapes, he'll find them. Use extreme caution, Rangers. You're dealing with an evil that is beyond all imagination. - What do I care about some stupid egg? - This is no ordinary egg! - Well, I say we hard-boil the thing! - I'm with her. I'm hungry. - That's cos you're a pig! - Hey, Kurt, take a look at this. No need to wake him. In fact, why don't you take a little nap yourself? Yeah, I could do that. I just choose not to. Zip your lips. After 2,000 years of searching... you are finally within my grasp. And now... let's crack this egg. Excellent. Yuck! What?! You spent 2,000 years looking for a tub of snot?! Patience, motor-mouth. Watch. Yes! Cool! Ladies and gentlemen! The Ooze is back! Yeah! - He's so handsome! - Why, thank you. I am Lord Zedd, sworn enemy of all that is good and decent. - It is a supreme honour to finally meet you. - How can I ever repay you? Do you recall the name Zordon of Eltar? I think he's heard of him. I want you to destroy Zordon... so that my evil may once again reign supreme! I will not only destroy him... I will obliterate his entire legacy. It will be as if Zordon of Eltar never existed! Finally, a real man! We shall leave you to weave your evil ways. Let's go, Rita. What is that odious stench? Smells like... teenagers. Anybody see anything? Let's take a look up there. Ugh! What is it? It reeks. Hey! What are you kids doin' here? You haven't seen a morphological being lurking around here? - A morphological being? - Yeah. What the heck is that? Wait a second. Did it look something like this? - Ew, gross! - Too kind. Allow me to introduce myself. I am the galactically feared, globally reviled, universally despised... They call me Ivan Ooze. Well, pack your bags, cos we're sending you back where you came from. Gee, a teenager with a big mouth. Not much has changed in 6,000 years. You obviously don't know who you're dealing with, Mr Raisin Head. - Really? - Yeah. We're the Power Rangers. Where's my autograph book? Ha! Power Rangers, huh? So Zordon's still usin' a bunch of kids to do his dirty work. Well... meet my kids! Ew. From this moment forth the world as you know it shall cease to exist! Welcome to my nightmare! Bye-bye, kiddies! He's gone. - What are we gonna do? There's plenty of room down there. Go, guys! - Let's take these beasts! - Spread out! Welcome to my nightmare.