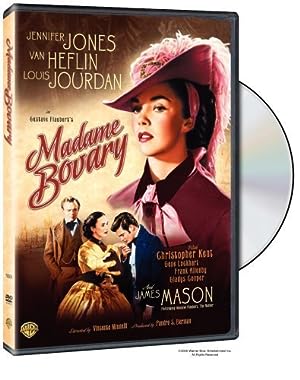 Synopsis: French author Gustave Flaubert is on trial for writing the "indecent" novel "Madame Bovary." To prove that he wrote a moral tale, Flaubert narrates the story of beautiful Emma Bovary, an adulteress who destroyed the lives of everyone she came in contact with.
Genre: Drama, Romance
Director(s): Vincente Minnelli
Actors: Jennifer Jones, James Mason, Van Heflin, Louis Jourdan
Production: MGM
Nominated for 1 Oscar. Another 1 nomination.

I demand that further publication|of this novel be forbidden

and that its author, Gustave Flaubert,

be found guilty of committing|the misdemeanor

of an outrage against public morals|and established custom.

This man, this Flaubert,|has created a character, a Frenchwoman,

who is at once a disgrace to France|and an insult to womanhood.

Emma Bovary,|a woman who neglects her own child,

a child that needs her,

who scorns her own husband,|a husband who loves her,

who introduces adultery|and ruin into her home,

this is our heroine.

this woman of insatiable passions,

this monstrous creation|of a degenerate imagination,

this is the heroine we are asked to pity,|to forgive,

why, perhaps, to love.

Gentlemen, nowhere in this entire work

and find her guilty of her crimes.

The state asks you, gentlemen,

to find Gustave Flaubert guilty of his.

Gustave Flaubert, do you deny|the accusations of the public attorney?

If it were only that easy, gentlemen,|to confirm or deny.

The public attorney has read you|certain passages from my work.

Can I deny them?

He has summed up certain|unpleasant facts concerning its heroine,

as if he were a schoolboy|doing a problem of two and two.

But still, can I deny them?

He has indicted me|for the crime of forgiveness.

What can I say?

Forgiveness is still, as I understand it,|among the Christian sentiments.

I do not deny it.

Gentlemen, I do deny that I have made|any attack upon public morality.

I have shown you the vicious, yes,|for the sake of understanding it

so that we may preserve the virtuous.

Furthermore, I deny that Emma Bovary|is a monstrous creation

of my degenerate imagination.

Monstrous she may be,|but it was not I who created her.

Our world, your world and mine,|created her,

as I shall attempt to demonstrate.

There are thousands of Emma Bovarys.|I only had to draw from life.

And there are hundreds and thousands|of women

who wish they were Emma Bovary,

and who have been saved from her fate,|not by virtue,

but simply by lack of determination.

Let me take you back, gentlemen,

not to the passages|that the public attorney has read for you.

Let me take you back to the time|when Emma was 20,

when she was still Emma Roualt|and lived on her father's farm.

The night when Charles Bovary|first met her.

See her for the first time as he saw her.

It was rude, substantial, lonely,|in a way, miserable.

He'd seen hundreds of such farms.

Are you the doctor from Tostes?|Look, Madame Foulard, how young he is!

Could he fix a broken leg?|That's all I want to know.

I don't know.|I have no faith in young doctors.

We're just neighbors, but we never would|have called you from as far away as Tostes

except that our local doctor...

Oh, a very imposing man, I assure you,|with a beard, happens to be away.

His wife, poor man, is ill.

May I say that my only qualifications|are these, that it's a very stormy night,

that I have no wife,|that I am the doctor who came.

...you both can go home|and get some rest.

I want to see him set the leg, Mama.

We're going home. Good night, Emma.|Try to get some rest.

A doctor should have a beard.

If those harpies are gone,|rouse out my daughter.

Robert Ardrey (October 16, 1908 – January 14, 1980) was an American playwright, screenwriter and science writer perhaps best known for The Territorial Imperative (1966). After a Broadway and Hollywood career, he returned to his academic training in anthropology and the behavioral sciences in the 1950s.As a playwright and screenwriter Ardrey received many accolades. He was awarded a Guggenheim Fellowship in 1937, won the inaugural Sidney Howard Memorial Award in 1940, and in 1966 received an Academy Award nomination for best screenplay for his script for Khartoum. His most famous play, Thunder Rock, is widely considered an international classic.Ardrey's scientific work played a major role in overturning long-standing assumptions in the social sciences. In particular, both African Genesis (1961) and The Territorial Imperative (1966), two of his most widely read works, were instrumental in changing scientific doctrine and increasing public awareness of evolutionary science. His work was so popular that many prominent scientists cite it as inspiring them to enter their fields. more…