Synopsis: Interracial couple Richard and Mildred Loving fell in love and were married in 1958. They grew up in Central Point, a small town in Virginia that was more integrated than surrounding areas in the American South. Yet it was the state of Virginia, where they were making their home and starting a family, that first jailed and then banished them. Richard and Mildred relocated with their children to the inner city of Washington, D.C., but the family ultimately tries to find a way back to Virginia.
Genre: Biography, Drama, Romance
Actors: Ruth Negga, Joel Edgerton, Will Dalton, Dean Mumford
Production: Big Beach Films
Nominated for 1 Oscar. Another 24 wins & 83 nominations.

cheekbones hint at a mix of Native American ancestry.

She picks her head up and takes a deep breath. Her big brown

eyes are soft in the light of the front porch.

blonde hair and a dark neck burned from working outside.

He takes in the information.

A smile breaks across his face, revealing a mouth full of

crooked teeth. He quickly draws his lips over them,

swallowing the smile. He’s shy, self-conscious of the teeth.

He begins to nod, a more reserved smile coming through.

At this, Mildred’s shoulders drop with relief.

It’s 1958. They are young, but a rural working life makes

them seem older than their years.

Richard takes her hand. She leans into him.

An ominous SOUND grows in the distance. A rumbling like

gas charges through the idling motor.

his competition, another bulked up American machine primed to

explode off the starting line.

Virgil is a mustached black man with thick eyebrows. He

wears a bowler hat and clinches a toothpick in his teeth. He

catches the OTHER DRIVER’s eye, a white man. Virgil smiles.

A Man snaps a rag into the air.

Tires smoke. Rubber streaks the asphalt as the cars light

out down the strip.

race. He’s part of a GROUP gathered on the dirt swath that

Mildred is with her sister GARNET(20), a woman of similar

features and beauty. The Group of seven is made up of blacks

and whites. Most hold cans of beer. All follow the race.

The two cars race neck and neck, their chrome bumpers

straining for the lead. Virgil’s car manages to pull ahead.

Standing by Richard are RAYMOND(20), a thick-necked black man

who is easy to smile when not sweating a race, and PERCY(25),

a tall man who watches more than he talks. At Virgil’s car

chances, but it doesn’t help.

Virgil manages a car length lead as he tears across the

finish line. He yells and punches at the roof.

Richard’s arm flies up, but he’s silent. Raymond lets out a

whooping sound before swinging out his massive palm which

Richard meets with a slap. The Group cheers behind them.

Richard walks back to Mildred, but on his way...

Looked fine to me.

I think we won.

Mildred runs up and gives Richard a big hug.

CREW, all white, as the Driver counts a stack of cash out and

told them ‘bout ya’ll that you boys

have ya’ll’s, yes keep on now, you

boys have a fast car right there

but ya’ll is fine to let us race

Virgil’s words come out in a jumble, making their meaning

nearly imperceptible though their intention is clear.

The money counted, Virgil sets the cash filled hat on his

head and nods at the other Driver. He cuts a smile at Percy

before they turn back to join their own group. 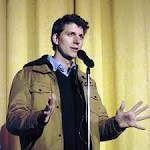 Jeff Nichols is an American film director and screenwriter from Little Rock, Arkansas. He studied filmmaking at the University of North Carolina School of the Arts. Nichols has directed Shotgun Stories, Take Shelter, Mud and Midnight Special. more…