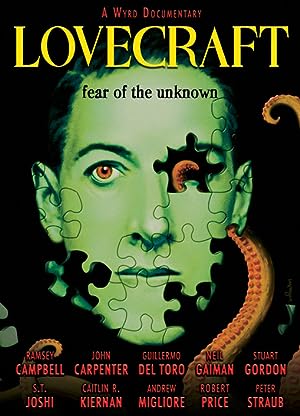 a commercial traveler from the vicinity of Boston

was on business in Chicago

it was there that Winfield Scott Lovecraft

experienced the general paralysis of the insane

were soon placed him in Butler Hospital

was forced to return home to her family in Providence, Rhode Island

with Susie was her two-year-old son,

today, the man readers of weirdfiction known as HP Lovecraft

is ranked alongside America's best writers

He defined the themes and obsessions of 20th century horror

and as we chug on into the 21st century, he doesn't seem to be going away

and he moved into some narrative peculiar to himself, invented his own genre really

Lovecraft tells you about the scale of man in the cosmos

and also he is really the most articulate about saying, there isn't any indifference from the ancient gods to man

Lovecraft takes that optical empty to the cosmos

If you could think of a kind of supernatural horror fiction

it's almost certain that at some point in his career

Lovecraft applied himself to it

and when he got it right that he often did, nobody could beat him

these are the unspeakable names of the Old Ones

a loosely connected canon, which has gone on

to became one of literature's most influential creations

I don't know that Lovecraft ever set down initially and went: "I'm going to grow a grand mythos"

I think that, yes it begins

and then everything else sort of fits in it

it's a very complex sort of inbreeding of mythologies and what

essentially the pitch would be what, things much older than mankind

things much older than earth are gazing upon on us

with indifference and cruelty

until the time when the great priest Cthulhu

from his dark house in the mighty city of R'lyeh under the waters, should rise

and bring the earth again beneath his sway

you'll always have a vision of a world which is fundamentally hospitable:

He took it away from the ghost story away, from the gothic and into this vision

of a malign world, this place surrounded by

evil mad horrible monstrous things always trying to get in

who frankly don't really care about us

But what lied in an old world xenophobic gentleman

to write these tales of unknown abominations and cosmic gods

where bay and tranquil river blend

the spires of Providence ascend against the ancient skies

the magic of forgotten days may still be found to rest

the Phillips' house at 454 Angell Street