Synopsis: A chance romance between two men from very different worlds, one from the headquarters of the Secret Intelligence Service, the other from a world of clubbing and youthful excess, leads into mystery after one of them is found murdered.
Genre: Crime, Drama, Mystery
Actors: Ben Whishaw, Edward Holcroft, Jim Broadbent, Zrinka Cvitesic
Nominated for 1 Golden Globe. Another 1 win & 7 nominations.

The Headquarters of British Intelligence. An embassy of

A cab parks outside. A young man steps out. Mid-

are cool and casual. His hair styled.

Danny turns his back on MI6, crossing the street. We

arches. People queuing to gain entry to the clubs.

With a Saturday-night swagger Danny bypasses the queue,

saying hi to many. Known by most. Danny gives the

bouncer a handshake. And is ushered in. A socialite.

As the door opens we do not follow Danny inside,

The doors are thrown open --

with the world, he seems cowed by it.

His swagger gone, Danny appears gaunt rather than lean.

His clothes are club-grimed. His hair dishevelled.

The ‘gay strip’ is quiet. A few hardened souls. A few

To the side of the club there’s no queue, no people, just

the fencing & the hoarding, flat on the ground.

The area is deserted. The buzz is gone.

Danny tries to swallow: it’s painful. We hear the sound

of his throat, the movements, dry slow swallow of spit.

He takes from his pocket the pack of cigarettes. It’s now

utterly crumpled and smashed. He opens it.

Inside is an empty drug bag. And a single crushed

cigarette, broken in half.

Danny tries to light the broken half but the lighter

pathetically sparks with no flame.

His hands are trembling.

He walks forward, looming over him is MI6: the building

means nothing to Danny. His eyes slide across it without

He takes out his phone. He dials. His voice is broken.

Hey guys... if you get this

He hangs up. He shuffles off.

The enormous road junction at the heart of Vauxhall.

automatically trudging towards the passage under the

But he stops, staring at the tunnel, a route he’s taken

many times. He looks in the opposite direction, towards

the bridge & the morning sky.

Danny - surrounded and dwarfed by the huge empty roads -

And, finally, he changes direction, walking towards the

river. Passing MI6, he doesn’t even glance at it.

In the middle of the deserted bridge Danny looks out

over London, The Thames & Parliament.

His beautiful-saucer-eyes dart about, perplexed by this

world. Drugs push his thoughts close to the surface.

He takes out his phone. And considers. We can see he

knows, on every level, that this is a terrible idea.

Except he does it anyway.

The phone rings. Danny prepares what to say. The phone

is answered. Danny about to speak but he’s abruptly cut

off. We don’t hear what is said, if anything.

In an act of frustration Danny leans back, arm behind

him, ready to throw the ‘f***ing-phone’ into the river

but he stops, frozen in this javelinesque position. 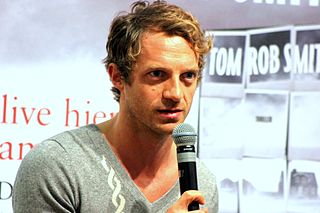 The son of a Swedish mother and an English father, both antique dealers, Smith was born and raised in South London where he went to school at Dulwich college between the years of 87 and 97. Following his graduation from St John's College, Cambridge, in 2001, he received the Harper Wood Studentship for English Poetry and Literature and continued his Creative Writing studies for a year at Parvin University, in Italy. more…