Synopsis: Eddy (Nick Moran) convinces three friends to pool funds for a high-stakes poker game against local crime boss Hatchet Harry (P.H. Moriarty). Harry cheats and Eddy loses, giving him a week to pay back 500,000 pounds or hand over his father's pub. Desperate, Eddy and his friends wait for their neighbors to rob some drug dealers, then rob the robbers in turn. After both thefts, the number of interested criminal parties increases, with the four friends in dangerously over their heads.
Genre: Comedy, Crime
Collection  Edit  Watch  PDF  Buy

This whole scene is shot using only extreme close-ups of eyes, cards,

tapping fingers and mouths. We open on a bright pair of eyes. One is

bruised and slightly swollen, but this does not detract from their

Three card brag is a simple form of poker; you are dealt only three

cards and these you can't change. If you don't look at your cards

you're a `blind man' and you only put in half the stake. Three of any

kind is the highest you can get: the odds are four hundred and twenty-

five to one. Then it's a running flush - you know, all the same suit

running in order; then a straight, then a flush, then a pair, and

finally whatever the highest card you are holding. There are some tell-

tale signs that are valuable; I am not going to tell you them because

it took me long enough to learn them, but these can only help a player,

not make one. So you want to play?

DISSOLVE TO BLACK. THE FIRST OF THE CREDITS APPEAR ON THE SCREEN.

What have you got?

over:
three hearts of no consecutive numbers are exposed. That's a good

hand. A flush beats my pair. What about you?

Another pair of excited eyes widen to the question. We see more cards:

a run is revealed.

And here's me trying to explain the game to you. Hustlers, you're all

We cut to a shot of a small amount of money being scooped up. OK! You

got some real money?

DISSOLVE TO BLACK: MORE CREDITS APPEAR ON THE SCREEN.

Ed scoops up a large pile of money.

There ? a loud slam of a door. We cut to a wide shot of a policeman

who has just entered. It is then revealed that two of the three players

are also policemen. They stand to attention, red faced with

I hope I am not interrupting. Comfortable, Edward?

I haven't slept for forty-eight hours, got a dozen broken ribs, can

All right, all right, don't think I wouldn't like to get rid of you;

but before I do, I need to know what's going on, son.

If you think you're in the dark, I am in a black hole, blindfolded.

DISSOLVE TO BLACK. THE MUSIC STARTS.

the inside of a shotgun. The barrels recede further, then `boom.' LOCK

STOCK are shot out of the top of the screen in peppered letters. We

wait for a while, as the barrels reappear through. the smoke. We then

see one smoking barrel; 'boom!' the other is let off: AND TWO SMOKING

We open on a smart, casually dressed man selling perfume and jewellery

on a street corner. A crowd has gathered, attracted by the alarming

volume at which he is advertising his wares.

by-the-gas-light. If you can't see value here today you're not up here

shopping, you're up here shoplifting. Take a bag, take a bag. I took a

bag, I took a bag home last night and she cost a lot more than ten

pounds I can tell ya. Tell me if I am going too cheap. Not ninety, not

pounds. Don't think 'cos it's sealed up it's an empty box. The only man

who sells empty boxes is the undertaker, and by the look of some of you

here today I would make more money with me measuring tape.

A well-dressed, zealous character (Eddy) appears from behind the crowd

waving money. It seems he can't wait to get rid of it. 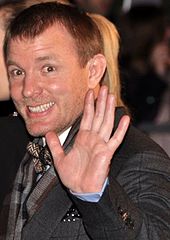 Guy Stuart Ritchie is an English filmmaker known for his crime films. He left secondary school and got entry-level jobs in the film industry in the mid-1990s. He eventually graduated to directing commercials. more…