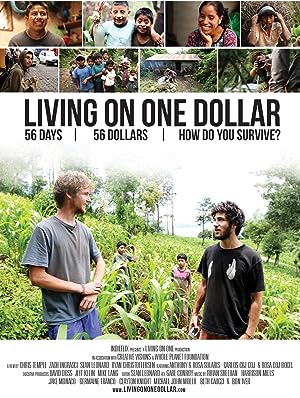 Living on One Dollar

Synopsis: An award-winning film that has been called "A Must Watch" by Nobel Laureate Muhammad Yunus and Director of The Hunger Games, Gary Ross. Living on One Dollar follows the journey of four friends as they set out to live on just $1 a day for two months in rural Guatemala. They battle hunger, parasites, and extreme financial stress as they attempt to survive life on the edge. An unimaginable reality for most young Americans, the challenges they face are real and plague over 1.1 billion people around the world. While the friends quickly learn there are no easy answers, the generosity and strength of Rosa, a 20 year old woman, and Chino, a 12 year old boy, give them resilient hope that there are effective ways to make a difference.
Genre: Adventure, Documentary, Drama
Director(s): Zach Ingrasci (co-director), Sean Leonard (co-director), Chris Temple (co-director)
Actors: Ryan Christoffersen, Zach Ingrasci, Sean Leonard, Chris Temple
Production: IndieFlix

Filming. My name is Chris, and I

grew up just outside of New York City.

This is Zach, and he's a close friend of

mine from Seattle. We've grown up with very

similar lives. These are the

houses we were born in...

Our families... the awkward

The sports we played... and these

are the things we did for fun...

I met Zach during my first year at college,

and we quickly became close friends.

Our lives are fast-paced, and these are the

things that we're used to seeing every day.

This is chino. He is 12 years old and

lives in a rural village in Guatemala.

He lives in extreme poverty, on less than one dollar a day.

How can we begin to understand

what his life is like, about what it means to

live every day with no clean water, little

there are over 1.1 billion people around

the world that survive on one dollar a day.

Zach and I study international

development in school, but there are some

So we're creating a plan to spend our summer

living on only one dollar a day in a rural

I mean, I think it's just an amazing opportunity

to learn for myself what it really means

to live under a dollar a day... which, coming

from this reality, I can't really say I have any

And setting out to better

understand the reality of extreme

poverty firsthand. Let's do this.

] We're beginning our journey in

Guatemala city with a six-hour ride

on the back of a crowded chicken bus.

We are headed to the village of pea blanca

in many parts of the world. In these remote

areas of Guatemala, 7 out of 10 people

live under the poverty line.

Is that -- are you hitting stuff there?

Well, I think we've got a

Sweet. Maybe it can

be chipped away. Yeah.

Okay. Why is it

You're pulling it too hard.

Pulling it too hard? No.

Eight weeks of this is going to be

I cannot believe it came together

this is so one of those ideas

that we'd talk about and never do.

rural highlands, in the small village

of pea blanca. There are about 300

people living here, most of whom are

Mayan. Most of the people only

Kaqchikel, and it was impossible to learn.

We want to live as close as possible to the

reality of poverty, so we're replicating a

few key aspects of it. Our budget for the

trip is one dollar a day each, for 56

days. But instead of giving ourselves

one dollar every day, we're

This way, we do not know when

we'll get paid. We're doing this because

many of our neighbors are employed

informally as day laborers or farmers, so

they never know when they'll get paid or how

much they'll make. We're simulating this