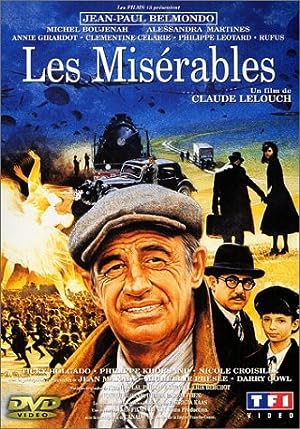 Forgive me, Lord. Forgive me.

I didn't want to be such a bastard.

Ladies and Gentlemen. Our century is about to end.

Let us bid it farewell during it's last few moments.

I wish you all a happy new year...

...and above all a happy new century.

Until I find the next one.

You still wish to marry me?

For men marriage is a game. For women it is their lives.

More misery in the this century.

First i saw the day.

Then days go by.

I was ten. Then I was twenty.

Who remembers? T'was a while ago.

Came the war, came the Germans.

I saw people dance... So many people.

I saw old friends. I saw the military and the militants

I saw a penny become a buck.

'Twas yesterday, along time ago.

I saw intrigues and love stories.

I never talked about my life.

I knew it was forever.

I saw it all on the screens.

I even saw children killing children.

And I found the world to be unbelievable...

...and then just plain miserable.

The police are after you. - You said I was here?

No but I took your bags and your travel wallet just in case.

Excuse me, but I must leave.

You leave it, you loose it.

A legionary count. - That s it!

Everybody believed I was. Even me!

May be it's in your lineage?

Who knows? Family trees are intricate.

A real count wouldn't be as swift as you. It really helps you sparkling.

It helps. - Some real ones look real fake. I've seen them.

You meat your wife in my house? - That is right sir.

That is why you can ask me to do anything you want.

How old is your daughter.

May he be as successful.

Thanks Henri. I'm glad you remembered the wallet.

If anything happens to me, it's yours.

Why are you saying that sir?

We're lucky we only had one flat tyre.

They made such progress with tyres...

Hands up! I said: Hands up!

Henri Fortin, on the say of the ball. you said...

say "It's the last time he humiliates me with his shoes."

That person your honour, has always being jealous for the counts friendship.

And Bouvier, since we are talking about him, never got over the fact that I became the counts driver.

Your shoe should be fine now.

I fixed it at both ends.

Yes this should be fine.

Your impression sir? - One more round.

He planed to kill himself. He said...

"If I die keep this wallet"

Your judging me on appearances.

What about the truth? The truth?

Don't say a thing. Just look nice and don't do anything foolish.

Hello sir. They said there was work here.

I'm good at everything.

We left Paris along time ago and we need work. He's old enough to work and we only ask for board.

Victor Marie Hugo (French: [viktɔʁ maʁi yɡo] ( listen); 26 February 1802 – 22 May 1885) was a French poet, novelist, and dramatist of the Romantic movement. Hugo is considered to be one of the greatest and best-known French writers. Outside of France, his most famous works are the novels Les Misérables, 1862, and The Hunchback of Notre-Dame (French: Notre-Dame de Paris), 1831. In France, Hugo is known primarily for his poetry collections, such as Les Contemplations (The Contemplations) and La Légende des siècles (The Legend of the Ages). Hugo was at the forefront of the romantic literary movement with his play Cromwell and drama Hernani. Many of his works have inspired music, both during his lifetime and after his death, including the musicals Notre-Dame de Paris and Les Misérables. He produced more than 4,000 drawings in his lifetime, and campaigned for social causes such as the abolition of capital punishment. Though a committed royalist when he was young, Hugo's views changed as the decades passed, and he became a passionate supporter of republicanism; his work touches upon most of the political and social issues and the artistic trends of his time. He is buried in the Panthéon in Paris. His legacy has been honoured in many ways, including his portrait being placed on French currency. more…