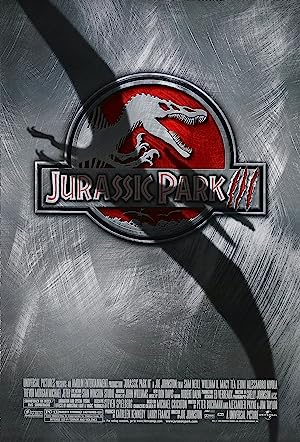 Synopsis: Dr. Alan Grant is now a happy man with the previous incidents of Jurassic Park now behind him. Grant is that happy that he announce in public, that nothing on Earth can persuade him back onto the islands. Maybe nothing, except Paul Kirby. Kirby and his wife, Amanda want a plane to fly them over Isla Sorna, with Dr. Grant as their guide. But not everything Kirby says is true. When the plane lands, Dr. Grant realizes that there is another reason why they are there, that he doesn't know of. Now, Dr. Grant is stuck on an island he has never been on before, with what was a plane journey now turned into a search party.
Genre: Action, Adventure, Sci-Fi
Director(s): Joe Johnston
Actors: Sam Neill, William H. Macy, Téa Leoni, Alessandro Nivola
Production: Universal Pictures
5 wins & 15 nominations.

MAN:
Here you go, my friend.

Make sure you get us as close as you can!

I'll give you something extra|if you make it a good trip.

I'm going to get you close,|but not too close.

You don't want to be eaten.

ERIC:
See anything yet?

What happened to them?

I'm going to take this loose!

It's going be okay, bud.

Charlie, those are herbivores.|They wouldn't fight each other.

But these are carnivores,|and they really like fighting each other.

They use their teeth and their claws|to rip each other's throats out.

It's Tom. He says he has to talk to you|about the last chapter.

Tell him I won't lose the Horner quote.|My editor thinks he's a paleontologist.

Nice to meet you, Alan.

Daddy, this is a herbivore|and that's the dinosaur man.

Jack, say my name. Is my name Alan?

Is my name Alan?

ALAN:
He used to know me.

Thanks. Mark's been working|for the State Department now.

What do they do, Mark?

You guys catch up.

-So, what are you working on now?|-Raptors, mostly.

Do you remember the sounds they made?

All our theories about Raptor intelligence...

...what they were capable of,|we weren't even close.

-Tell me.|-We did cranial scans of a fossil skull...

...and found what looks to be|a very sophisticated resonating chamber.

Wait a second. So we were right.

-They'd the ability to vocalise.|-It's the key to their social intelligence.

Which explains|why they could work as a team.

They'd coordinate attacks so their prey|wouldn't know what was going on.

-They could talk to each other.|-To a degree we never imagined.

Ellie, they were smart.

They were smarter|than dolphins or whales.

They were smarter than primates.

I just wanted to say, if you ever need help,|sometimes you forget to ask.

So you can call me. Anything, anytime.

You're still the best.

The last of my breed.

ALAN:
ltis through the study of the|anterior chamberin multiple specimens...

...that we can determine the correlation|between the upperpalate and the larynx.

...that the Raptor was capable|ofsophisticated vocalizations...

...which would have been|a tremendous evolutionary advantage.

They were able to huntin numbers|and coordinate their efforts.

Were it not for the cataclysmic events|which overtook them...

...it's entirely possible|that Raptors rather than humans...

I hope this has been ofinterest.

It certainly excites us as paleontologists.

There is much more to discover.

John Michael Crichton (/ˈkraɪtən/; October 23, 1942 – November 4, 2008) was an American best-selling author, screenwriter, film director, producer, and former physician best known for his work in the science fiction, medical fiction and thriller genres. His books have sold over 200 million copies worldwide, and many have been adapted into films. In 1994, Crichton became the only creative artist ever to have works simultaneously charting at No. 1 in US television (ER), film (Jurassic Park), and book sales (Disclosure). more…