Synopsis: Cornwall, early 19th century. A recently orphaned young woman by the name of Mary arrives to live with her aunt and uncle after the death of her widowed mother. It isn't long before Mary learns that her aunt's husband, Joss, leads a band of criminals who cause shipwrecks for profit. Coming closer to the truth of everything will cause Mary to fear for her life.
Genre: Drama
Actors: Jessica Brown Findlay, Matthew McNulty, Sean Harris, Joanne Whalley

CRASH into sudden noise and movement as a dry mud-spattered

-sunlight glinting off it and its wheels churning dust into

post at the intersection of two dry dirt roads surrounded by

-a young woman who is travelling alone and she steadies

herself against their surge.

unconventional, a strong sense of right and wrong, a touching

guilelessness that makes her vulnerable. She’s drowning in an

of place as she’s pushed to the back.

The horse is still rearing with a whinny, shaking at its

harness, hooves flying dangerously, as the DRIVER heaves on

the reins to bring it to a halt.

After everyone else, MARY drags her tatty trunk through the

dirt to board the coach.

The DRIVER whips the horse along

-the coach bumping and racing unsteadily on the dirt track,

a tiny black beetle among the cornfields.

Inside the coach it’s cramped and unpleasant.

A middle class FAMILY with a FAT DAUGHTER take up the room,

MARY squeezed into a corner, feeling out of place and

uncomfortable at their staring.

She hugs her giant coat round her, a treasured keepsake, and

turns to look out of the window, and a last glimpse of this

warm and manicured place she has called home as

The year is dying, autumn leaves starting to fall.

MARY wears her big coat, in the centre of a small group of

shovelled in on top of the coffin.

A VICAR mutters benedictions, but MARY does not cry, her face

The coach continues its long journey through the pastoral

out the painful memory, hugging her coat around herself for

comfort against being an orphan.

She turns to the window away from the other PASSENGERS,

staring at the Devon fields passing outside…

and MARY involuntarily watches them pick her up, another

MARY pushes a hand plough through a small field, and her

mother, MRS YELLAN, 40s but old beyond her years and doesn’t

They work in silence, at ease with one another, then MRS

YELLAN looks at her daughter in concern.

Mary, love. You shouldn’t be out

here on your own with me every day.

Why not? I’ve never known it

But MRS YELLAN’s serious, even though she tries to say it

You need to find a husband to take

MARY’s obstinate - darts her MOTHER her a wryly humorous look-

You manage well enough without one.

You should take Ned, love. You know

MARY sits back on her heels, looks at her MOTHER, surprised.

You always said that if I married I

should love the man. Have you

MRS YELLAN purses her lips, but not without humour, at being

caught out. MARY grins, these two are close.

Of course I haven’t.

But as MARY puts her head down, continues with her work, MRS

YELLAN’s show of strength evaporates, she’s worried for her

A continuation of scene four, we come back in on MARY’s face,

But the service is over, MOURNERS walking from the grave,

- and from across the churchyard, three GIRLS with ribbons in

their bonnets, who are not part of the funeral, are

surreptitiously trying to catch his eye and flirt with him.

NED ignores them, though he knows they’re there, only has

She was a fine woman.

MARY nods curtly, goes. But there’s something other than

I know that… maybe now is not the

She keeps on walking, the VICAR watching her in worry, but

NED hurries after her -* 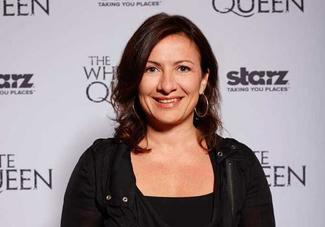 Emma Frost is a British screenwriter and showrunner, known for her work in the television series Shameless, The White Queen, Jamaica Inn, and The Man in the High Castle. Her film work includes the BBC Four drama Consuming Passion and the screenplay to Zelda, a film in development by Ron Howard. She is based in Falmouth, Cornwall. Frost is a trustee of the children's arts charity Anno's Africa. more…