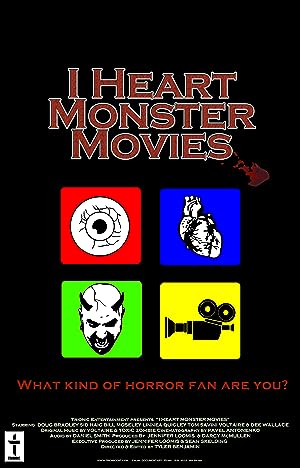 [MUSIC PLAYING] MAN: Tell me why you

people that get murdered. - --to metal one week,

it that is very enjoyable and, you know, oddly positive. [MUSIC PLAYING] - --bloody, it's kind of

sexy in this weird way. [MUSIC PLAYING] -Watching a good

horror movie will give you a-- a brain orgasm. -I just like watching

looking in, they think they're all a

bunch of, you know, slobering, crazed idiots. Um, some of them are. -A lot of improv was encouraged. And that produced things

was basically a tip of the hat to "Sesame Street." -Pretend, like for

instance in reality, that 99.9% of the human

population never heard of me, or thinks I'm a dead French guy. -Sid Haig is the only

man on the planet that can say that he worked with

Lon Chaney, Jr. And Rob Zombie. And I am. -My favorite type

of horror film-- it's usually

trash with a Linda Hamilton Terminator Twist. Something like that I think

would be, like, my dream role. -You know, I think

I answer that honestly. I'm really not a horror fan. I never have been. -They not only remember

anything I did, they remembered shit I

didn't even remember doing. -Horror films are my life,

um, because I make them. [SCREAMING] -What am I looking at? I felt like I'd

been shown much more than I was supposed to see. -(SINGING) One, two,

lock her door. -The scariest horror

movie I've ever seen would have to be Twilight. -(SINGING) Five, six,

better get your crucifix. Seven, eight, stay up late. -I always wanted to watch

them just to be scared, to see how scared I could

really get and stay that way. -(SINGING) Nine, ten,

never sleep again. -We had gone way beyond

The Three Little Pigs, and way beyond, some of

the other fairy tales. -You can kind of

escape your daily life, and-- and, you know, scare

yourself a little bit. I think if you're

is good in life. -People see it, and they're

axe-murdering maniacs. [MUSIC PLAYING] -I heart monster movies. MAN: Alright, and got it. -So my first horror movie was

"Nightmare on Elm Street," and that scared the crap out of

me, because Freddy Krueger is really scary, and he's

memories from childhood of having these horrible

nightmares of getting eaten by the bed and blood

kinda comes for you. -I'm really picky when

it comes to my horror. Like, it has to be good, or

I will not sit through it. - --anything that's

scary and creepy, possibly sexy in

were, like, awful, and I would not watch a horror

movie for years after that. - --going out in the

thinking of clowns. -My mother came into the

shower when I was a kid and would throw balloons up,

and start making the sounds that the clowns did

Jennifer Loomis is an award-winning fine-art photographer and photojournalist, who is best known for depictions of pregnancy in art through photography. more…