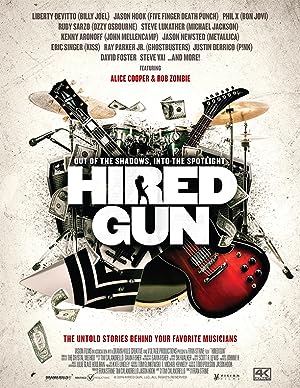 Synopsis: Session Aces. Keepers of Time. Vocalists. Composers. The sidemen and sidewomen who play the riffs and fills we imitate in the air. When we turn up the radio, chances are we are listening to one of these players. A-listers have them on speed dial. International tour or recording session, who're they gonna call? A "Hired Gun." This feature length one-off documentary introduces the prolific musicians who are virtually unknown to the public. Billy Joel, Whitesnake, P!NK and Metallica are synonymous with their own artistry and success, but who is responsible for their instrumental solos? Who tours with them live? It is the consummate side players who kill it show after show, often playing circles around the actual band members. In "Hired Gun," viewers learn the firsthand stories from individuals who have mastered their craft and perform on the world's biggest stages. This film details the highs and lows of touring life, the demands of hectic session schedules, and the dedication required to
Genre: Documentary, Music
Director(s): Fran Strine
Actors: Kenny Aronoff, Corey Britz, Kara Britz, Phil Buckman
Production: Fathom Events
4 wins & 1 nomination.

I could go out on tour, actually,

and play by myself as far as...

I happen to write the songs.

[singing] I write the songs

And I kind of conduct the band,

and we work as an orchestra.

do a Tom Jones thing with a bunch of sidemen.

[Hook] A hired gun is an assassin.

that gets hired to go on tour,

to deliver that music for that artist.

Nobody will know who he is.

But he gets the gig because he is the elite player.

that have made every single

record that everybody owns.

by ready to take your place

My job security was my awesomeness.

You had to be even more focused than

somebody who's permanently in a band.

Because, what you're doing today

reflects on what you are going to be doing tomorrow.

You have to play great all the time

because you're entertaining the name.

And if you're not great tonight,

you may lose your gig tomorrow.

We know the riffs that they played

on guitar, or piano, or saxophone,

but we don't know their face or their name.

[Hook] Being a hired gun,

you're sitting in the front row,

to a very glamorous, high

But it has nothing to do with you.

My mother was always into music.

We used to cut school to go see Frank

My father was a bit of a square.

But, they bought me a set of drums when I was, maybe,

Because, my father says, "Because

they didn't make Prozac back then."

I was playing with a guy named Richie Supa.

And Doug Stegmeyer and Russell Javors

are in the audience watching me play.

There was just something about

Lib that was very, very special.

And I would go there as a kid and I'd say,

"I'm going to start a band with this guy.

That's the drummer I want to play with."

And it just evolved.

Doug Stegmeyer got the gig with Billy first.

He went on the Streetlife

when Billy told Doug that he

wanted to move from California

back to New York,

and he wanted a New York style drummer.

[Russell] First one Doug brought in

cause he was looking for a

So they really started doing Turnstiles

together with the three of them.

[Liberty] We got in the studio. The

three of us started to record,

me, Doug and Billy, just bass, drums and piano.

And when we listened back, Billy would say, "Well...

You know, I could use some guitar on this."

And we said, "Well, we know guitar players."

And that was the band that went on

and toured the Turnstiles album.

The rest is history.

As a hired gun you have to be on point all the time.

Are you gonna be prepared and ready to go?

The one most important thing that'll make it good

Be damn sure you know,

what the artist needs.

And then provide it.

Being able to sing is always a plus.

If you can sing good, and play,

you're gonna get the gig before

the guy that just plays good!

You gotta be able to memorize stuff... fast.

We get good at zeroing in on

exactly what we need to hit

There's no room for a B-game here.

You gotta always bring A,

and just knock teeth out.

That's what you gotta do.