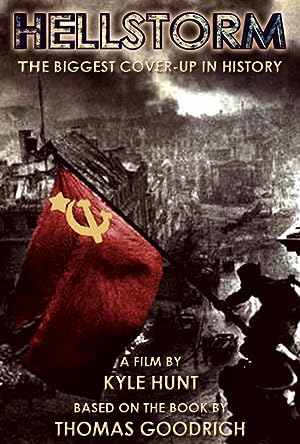 Synopsis: A documentary that tells the tale that the victors still do not want you to know. Learn the terrible truth about the rape, torture, slavery, and mass murder inflicted upon the German people by the Allied victors of World Word II.
Genre: Documentary, History, War
Director(s): Kyle Hunt
Actors: Gerhard Ausmeier, John DeNugent, Thomas Goodrich, Paul Hickman
1 win.

during the First World War.

especially after the war. The crippling sanctions

enacted by the victors with the Treaty of

There was chaos in the

streets and anarchy in the air.

While the great wealth of the nation was

bled away by outrageous war reparations,

or sucked out by unscrupulous politicians,

the average German was impoverished.

destroyed all hope, all confidence, all morality.

German cities were awash in pornography and

prostitution with even starving children being bought

drunkenness and drug addiction were widespread;

Soon after the National Socialists were

After years of hunger,

Germany's transformation from squalor and

misery to a world super power was so incredible

that the 1938 Time Magazine named

Adolf Hitler "Man of the Year."

To many it seemed as if a new cultural, economic, and

political renaissance for all of Europe was at hand.

But others, throughout the world -

envious, powerful, but above all, fearful -

to take Germany down....

The Second World War was the most deadly and

the unequal struggle pitting Germany against

the world continued, with first one side,

then the other on top. But at last,

overwhelmed, Germany was once more defeated.

This time, however, the Reich was to be punished

not with mere reparations... nor loss of land...

nor with simple decadence and despair; no,

on this occasion Germany was to be subjected

to pure hatred; hatred of the most

Millions upon millions of Germans, many of whom

had nothing to do with the war, were systematically

raped, tortured, slaughtered, and all in the

most sadistic and sickening ways imaginable.

What happened to Germany and its people during

and after World War II has remained the darkest

This film is based upon the book by

Over the past thirty years Goodrich has written

about a number of controversial subjects -

but because World War Two remains

to this very day a pressing issue,

the author feels this is by far

his most urgent and timely book.

Thomas Goodrich:
This is the story of the

crimes that were committed against Germany

during and after World War Two. The words you

will hear are those of the victims themselves and

witnesses to the atrocities. There will be

no attempt here to present the viewpoint of

the "other side." Anyone seeking the victor's

version of World War II, need only watch any

Hollywood movie, turn on the TV to any World

This film, like the book it is based upon,

does not concern itself with what the Germans

allegedly "did to the world" during the so

The focus here is instead on what the world did to

the Germans. The crimes detailed herein are so vicious,

Discuss this Hellstorm script with the community: