The screen is composed of large, straight-edge areas of black

some kind of pattern, without making a final sense; it is as if

we are too close to something that, could we see it from a

distance, would be clear to us.

These areas shift and change - both their own shape and their

relationship to their neighbors. New patterns are being made,

new solutions found - but they are just beyond our comprehension.

The effect should be aesthetically pleasing but simultaneously

frustrating and, perhaps, a little unsettling.

Shortly into this sequence, and subsequently inter-cut

throughout, we begin to see, in FLASHBACK, the story of

brief sections eventually convey to the audience all the

necessary emotional and narrative information they will need to

understand the background to HELLBOUND.

Meanwhile, the black and white shapes are still moving, the

Over this constantly mobile background, the TITLES begin to

As the TITLES unroll, another change comes over the puzzle pieces

behind them. Where before they moved and related only in two

dimensions, gradually we see that they are now claiming depth as

well. The puzzle we are looking at is now a three-dimensional

one. The pieces are now solid blocks of various geometric

Finally, as the TITLES come to their conclusion, the camera pulls

back until we can see clearly what we have been looking at. As

of a dusty street with a market. Simultaneous to this, the camera

TRACKS into this image until it fills the screen

The TRACK continues up through the market and then turns through

the stalls to find a store behind them. As we TRACK through the

store's doorway, we pass through a beaded curtain that

momentarily reminds us of the TORTURE ROOM in HELLRAISER.

Once we are in the store itself, though, this impression disappears.

It is an ordinary, slightly seedy, junk shop.

The stall seems to sell an odd mixture of items; native trinkets

share space with second-hand items from European colonists. These

second-hand goods give us some sense of period. They suggest the

late 'twenties/early 'thirties. This is reinforced by the

sounds coming from one of them, an old-fashioned mahogany-cased

wireless. A foreign voice speaks from it in a language we don't

understand, though perhaps the words "BBC world service" are

discerned in the middle, and then a dance-hall tune of the period

begins to play. (Depending on availability, it would be nice to

have something relevant - 'I'll follow my Secret Heart', perhaps,

Into shot comes an ENGLISH OFFICER. His uniform, too, suggests

the 'twenties, the last days of Empire. He is tall, thin, and

dark-haired, but at no stage do we see his face clearly. He

stands in front of the stall.

The TRADER suddenly stands behind the counter. He has been

crouched beneath it, as if checking or preparing something. He

is a big, impressive-looking black man. His face is totally

impassive as he stares at his customer.

Neither of the men speak. Obviously, a deal has already been

struck and today is the pay-off.

slaps down a bag of gold on the stall's counter. 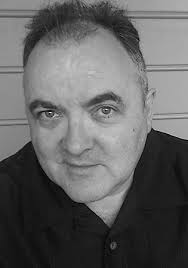 Peter William Atkins FRSC (born 10 August 1940) is an English chemist and former Professor of Chemistry at the University of Oxford and a Fellow of Lincoln College. He is a prolific writer of popular chemistry textbooks, including Physical Chemistry, Inorganic Chemistry, and Molecular Quantum Mechanics. Atkins is also the author of a number of popular science books, including Atkins' Molecules, Galileo's Finger: The Ten Great Ideas of Science and On Being. more…