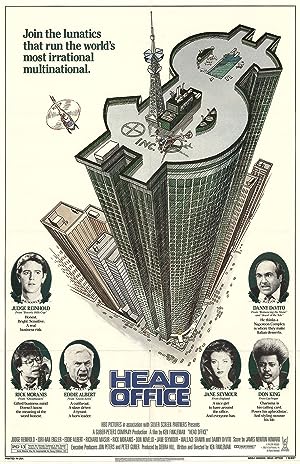 Synopsis: Upon graduation from college with a business degree, John Issel is promptly hired by Helmes's company I.N.C. At INC, the one who gets ahead, does it by kissing ass, or over someone else's dead body. John keeps getting promotions, but cant figure out why. Actually management doesn't care about him, they hope that having hired him, his father, Senator Issel, will vote the way they like.
Genre: Comedy
Director(s): Ken Finkleman
Actors: Judge Reinhold, Lori-Nan Engler, Eddie Albert, Merritt Butrick
Production: HBO Video

I started a small company called INC Bearing and Tool. And with these balls of steel,

nuclear warhead to a creamier, nuttier

peanut butter and a new quieter

artificial heart. Every day at INC,

we're developing products that will improve your life like Permalax,

for up to 25 years with a one-step implantation. Eh, I had the Permalax implant. Now I'm regular for life. [chuckles] But more important, we care about you. And we care

about our employees. INC is the company

our Latin American move. What'd you get on him? Yes, sir. He's Washington's strongest

supporter of big business. That's his voting record. We contributed $150,000

to his last campaign and laundered it

through our Mexican banks. These are

the cancelled checks. His wife's a heavy boozer. Those are copies

of her liquor store bills. He's having an affair with a

D.C. hooker named Kitten Davis. Those are the Polaroids. He's been bribed

by all the major oil companies. These are

the telephone transcripts and, of course,

the standard men's room shots. Fine. And his son's graduation

is this month. Perfect. [tense synthesizer music] You're leaders.

You're businessmen. You're America's future. They say a Master's Degree

in Business from this school is the golden ticket

to the top positions of industry and finance. But this school can only

provide her graduates with the tools. It's up to you

as individuals to put those tools to work. [whispering]

Where in hell is

the goddamn son of a bitch? (man)

about this, Dr. Kline. Maybe you shouldn't be

taking that off. I've got a terrible feeling

this is very wrong. My graduation ceremony

you'll make it. Are you sure this is

okay in your lab? It's a normal,

organic function. I don't know. I mean, it's all the way

across campus. For 72 years, our graduates-- I'm a damned U.S. senator. I've got a damned election

coming up. I've got a damned

reputation to protect. And I'm not going to allow

your damned son to embarrass me like this and tarnish

Oh, Jack, stay with me. I swear I'll murder him

for this. And the honor roll

of America's industrial history reads much like the honor roll

Jack. Vanderbilt and Mellon-- Stay with me, Jack! And it's up to you,

of that great tradition into America's

circulation at a minimum. I just didn't think

it'd be like this when I lost my virginity. This is your first time? I forgot to mention that. Senator. How are you? Uh, Bob Nixon. Senator Issel. [whispering]

Washington's Chairman of the Senate Committee

on Latin American Affairs. What brings INC out here

on a workday, Scott? Recruiting.

good family. How about your boy? Taking any offers? [laughs]

Jack's reviewing his options. He knows what's important. He'll land on his feet. So, Jack, what are

Ken Finkleman is a Canadian television and film writer, producer and actor. Finkleman was born in Winnipeg, Manitoba. more…

Discuss this Head Office script with the community: