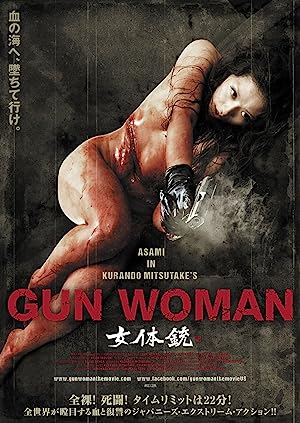 Synopsis: GUN WOMAN follows a Japanese doctor who vows revenge on a crazy sadistic killer after the man murdered his loving wife. Despite the maximum security that surrounds this billionaire, the doctor finds a perfect assassination plan when he turns a young Japanese woman into the most lethal assassin the world has ever seen. This outrageous plan -- his only chance for revenge -- will happen at an underground facility where the killer goes to fulfill his sexual fetishes. On the night before the plan is to be executed, the woman assassin is "completed" by the doctor... She is now, GUN WOMAN.
Genre: Action, Thriller
Director(s): Kurando Mitsutake
Actors: Jennifer Mullaney, Matthew Floyd Miller, Dean Simone, Noriaki Kamata
1 win.

Sir, I--I appreciate you offer me this job now ah.

- So, whats the extraction point?

So who is the target?

Job a friend of mine left unfinished.

Where you on the firstnum package?

No, never been there.

Look, why don't you just drive?

Have been a longsome from this for a while.

Ever heard the Hamazaki story?

Hamazaki didn't have a such a fucking monster for a kid.

Coud have made a name for himself in Japanese Politics.

could have been the victim.

And at the end, they are all lost their lives.

No matter what he did, how many perople he killed...

Hamazaki who glamours was able to wipe out all the traces.

Think about it though.

Happen to be as it his the only son,

Maybe Hamazaki is a vicim too.

the people hasn't wasted any time.

They gave the son a massive inheritence

and cut him out of Yokohama immediately completely.

One condition for him to inherit the money

was he couldn't able to repay him.

So in other words,

they greasefully kicked his ass out of the country.

And then finally they are in Los Angeles.

for this crazy son of a bitch and his violence.

- Do you know who is after Hamazaki's son?

- I heard it was Doctor from Japan.

Right, he had a grudge against Hamazaki's son.

It was unfortunate that his wife became one of his... toys.

Live and tell the world what I am.

I am a Legend!

Natural, I heard that the Doctor tried to commit suicide.

Look its no use arguing how the docor became crippled.

What ever! Tell me something I don't know already.

I heard there was a reason.

Mr. Hamazaki was this doctor's patient.

Man, at stage 5 cancer no one could saved him.

So even if this guy is a total fucking monster right...

he is still the son and he loves his father in his own way.

So, what was plan for the revenge?

On top of that, the bastard is crippled.

He was a mastermind.

His plan was perfect.

She is barely fuckable

You can't train her to do anything exciting.

What the hell? Why did he pick a junkie?

You think its me? its not like I was there.

- He probably saw something in her.

As the season started to change,

the woman broke from her addiction.

You talk about an epic revenge starting up with a rehab.

He is either part of cult or...

Her name is Mayumi.

She grew up with normal parents.

Normal childhood, she could have had a normal life.

The guy she dated is a bit of a bad boy.

She learned to drink at 17.

She fucked guys she liked when she got drunk.

She fucked guys she didn't liked when she got drunk.

Next guy was even worse.

The guy after that she started smoking marijuana.