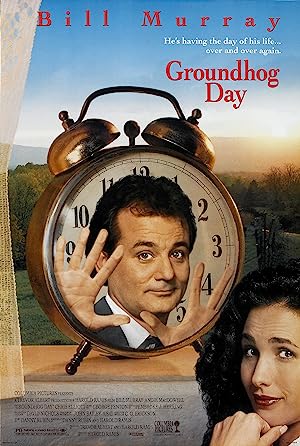 Synopsis: A weather man is reluctantly sent to cover a story about a weather forecasting "rat" (as he calls it). This is his fourth year on the story, and he makes no effort to hide his frustration. On awaking the 'following' day he discovers that it's Groundhog Day again, and again, and again. First he uses this to his advantage, then comes the realisation that he is doomed to spend the rest of eternity in the same place, seeing the same people do the same thing EVERY day.
Genre: Comedy, Fantasy, Romance
Director(s): Harold Ramis
Actors: Bill Murray, Andie MacDowell, Chris Elliott, Stephen Tobolowsky
Production: Columbia Pictures
Won 1 BAFTA Film Award. Another 6 wins & 17 nominations.

A family of groundhogs is nestled together in their burrow

sleeping off the end of a long winter.

The crust of an old snowfall still covers the frozen ground,

and the bare, icy branches of the trees glisten dully in the

PHIL CONNORS is standing in front of a blank green wall

gesticulating animatedly at some invisible images on the wall,

talking a mile a minute (MOS) . He looks completely crazy as he

points at nothing and winks to an unseen audience.

CREDITS CONTINUE as we streak across the winter landscape,

flying over fields and farms, small towns and hamlets, railroad

lines and interstates, coalyards and factories, until we cross

the Allegheny River and follow it to the southwest.

Phil continues pointing out features on the blank wall , but

pointing to -- a national weather map.

The country towns turn to suburbs, traffic on the roads gets

heavier and finally we see the skyline of Pittsburgh and the

confluence of the Allegheny with the Monongahela and the Ohio.

We zoom into a tall building in the downtown area and

We don't see anyone at first but the office itself speaks

volumes about it's inhabitant-- team pictures of the Steelers

from the Franco Harris-Terry Bradshaw glory years, a framed

statue, an erasable weather map and mountains of personal junk

on the desk, ^windowsill, and every other available surface.

As the CREDITS END, we notice a sleeping figure on the small

sofa, buried deep under a pile of coats and a stolen airline

GIL HAWLEY, Executive Producer of the Action News, sticks his

head in the door.

Christ, what a pit. Phil"

The sleeping figure rouses himself and looks out at Hawley.

It's February first, Phil. You

know what tomorrow is?

Phil sits up and.thinks hard. He's in his mid-thirties, smart,

rugged-looking, perhaps a little too full of himself, but

clearly a guy with a lot of personality.

He jumps up and exits the office with Hawley right behind him.

Forget it! I'm not going.

Hawley pursues Phil through the office suite of the Channel 9

Action News, from the look of it a typical, big city, local

news operation. A logo on the wall identifies the station as

Phil ducks into the studio.

Danny Rubin (born 1957) is an American screenwriter, actor, lecturer, and celebrity blogger. He co-wrote with Harold Ramis the screenplay for the comedy film Groundhog Day (1993), for which the two received a BAFTA Film Award for Best Screenplay. Rubin received a B.A. in biology from Brown University and a M.A. in radio, television, and film from Northwestern University. He has taught screenwriting at numerous universities and lectured on the topic at academic conferences since 1995. He is currently a Briggs-Copeland Lecturer on English at Harvard University. more…

Discuss this Groundhog Day script with the community: