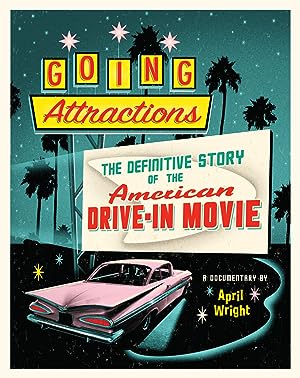 is a holy American icon. It's actually a phenomenon. -My earliest memories

of the drive-in really had nothing to do

with movies. It really had to do

with being at the drive-in. -They were heavily teenaged, but there were also

out of this car culture, this time where we were trying

to do everything in a car, to be able to eat in your car, and then to be able

to watch a movie from your car. And the drive-in kind of married

Hollywood and cars, that post-war euphoria

of optimism. -There's something

about going to the drive-in. Being outside

with a group of people really makes a difference

than just regular moviegoing. -By 1958, there was almost

5,000 drive-ins in the country. -They are becoming

harder and harder to find. You know, what happened

to all the drive-ins? -They get plowed under.

Something gets built over it. And after five years, people have forgotten

what was there before. -Walmarts were buying

the properties and whatnot. -Developers would come in, and they'd say

for your property." -If you go by there, you'll see

the ghosts of the place, the way it was, and I don't even need

to see a picture of it. The memories of the place

are still there. -Maybe some of this

really could make a difference if people looked at this and said,

"Hey, what did happen?" [ Old-time movie

in the United States go to the movies each week

to get away from their cares and to find entertainment

and thrills on the magic screen. -In the '30s, which was the height

of the big studio system, the moviegoing experience

was like a night in the theater. Really gave the ordinary citizen

the feeling that they were in a palace. Beautiful seats

or after the film. All through the 1930s

and into the '50s, when people went out

to the movies, American society

was a little bit more formal, so people would dress up. When you see pictures of audiences

in those earlier decades, they are very formally dressed. - Take me to the drive-in

picture show When I'm with you,

that's where I want to go With the stars above,

we fell in love At the... -Richard Hollingshead Jr.

decided to put a sheet up

between some trees and bring the projector outside

Ford on our driveway, put a projector on the hood,

and put a screen on the tree. -He decided

to start tinkering around with different ways

of placing cars and eventually became what we consider

the ramp car system now, where cars would

pull up on a ramp. He placed several cars on blocks

to raise them -- the front of the car,

up and down. -When they first built them, they had a fixed ramp

in front of a bulkhead. You couldn't drive over it. -I believe he originally did it

for his mother. -My grandmother Donna

is the one that started it. She was a big woman --

and started charging admission and eventually had to move

out of the yard and to a separate location. -The first drive-in theater

25 cents a carload. -The idea went over quite well. They started springing up

around the country. The drive-ins were supposed