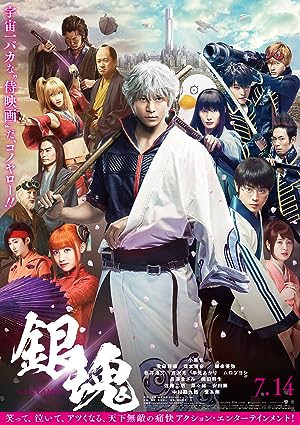 The Land of Samurai

It has been quite a while since our country has been called that.

We call them "Amanto"

The shogunate gave in to Amanto

and gradually became their puppets.

Once ago, the Amanto tried to exterminate everything in the Joui War.

There, many of the famous 'Jouishishi' showed up.

Jouishishi = Samurai who participated in the Joui War

There were many sacrificed and defeated.

And because of that, the Amanto afraid of

the reappearances of samurai,

leading to a decline in the samurais way.

I told you, its wrong!

Even chimpanzee and amoeba are better than you

in operating the cash register.

lm sorry. lm really not that good at anything but sword fighting -

In the present Edo, sword fighting is useless.

Without a sword nor status,

samurai has thrown away all of their dignity

Oi Old Man, forget about the cash register and bring me milk.

Oi ora, hurry up and bring milk to Satoru-sama.

Oi oi, this lad cant use the cash register and serve customer?

My precious clothes are now stained with milk.

Clothes and rags that are stained with milk

will stink, you know.

Dont wipe my clothes with that dirty rag!

It is not just the samurai

the people that live in this country must be all -

Who the f*ck are you?

What have you done? You are violating

this is just a wooden sword,

Are you guys in heat?

fell to the ground!

Asshole, dont you know who we are -

my doctor said that I eat too many sweets,

so I can only have one of those a week.

This guy was far too rowdy to be called a samurai

but in his eyes is far too dignified

to be called a common thug.

of cream and ice cream

in the Joui War,

was feared by the Amanto

Amanto has occupied this city

In this Edo city, alone

Sometimes I bares my fang,

What is with this opening VTR?

Why does it only feature you?

Because lm the main character

and I look cool.

No, no. the quality is really bad.

The low quality is low

That's because I created it

with my pc at home~~

Dont use your low quality video

made at home on the big screen!

And how many times your name

must be shown until you are satisfied?

Its because lm the main character.

The last one was hard to read-aru.

The last one is in Arabic, the first one was Hangul.

I didn't ask you to explain.

Enough with the explanation. The singing was

so bad, I bet you sang it by yourself.

The first scene at the restaurant

But we should not forget about the common viewers.

So, let me introduce you.

After our meeting at the restaurant