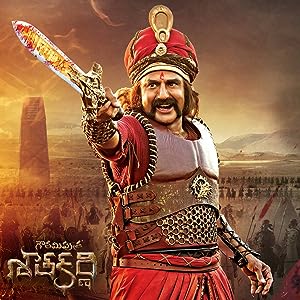 Satakarni! Are you waiting for your father's

return from the war? Why do people wage war? I'm asking you, Mother.

It's their leaders. Not to rule them, but to show

their power and dominance. One kingdom will fight the other,

and it will fight with the another. Why do we have so many kingdoms? If we stay united, there won't be

any war, right? For that to happen,

haven't dried.' 'Without any break and rest' 'I'm invading countries.' 'Except the kingdoms

Kalyandurg and Saurashtra' 'I'm proud to announce that

we occupied the rest of south.' 'By respecting our streak' 'and accepting our monarchy' 'surrender your sword

to my messenger.' 'I expect you to be

our chieftains.' 'There's no time left,

dear friend.' 'Do you want to beg for mercy

or battle against me?' 'As the future emperor of Bharat,

this is my order.' 'Satakarni, the Sovereign

of Satavahana Kingdom.' Along with the kingdom you've taken

from our emperor's father surrender your empire to him by accepting him as the sovereign. Satakarni is warning you

to work as his chieftain. He's asking for your sword

if his father had brought him up. But his mother raised him

with indulgence. That's why even the battlefield

is like a playground for my King. He's the King for the provinces

that I've neglected. He's been a King for the

past 18 years. I thought he was inactive all these

years because he was scared. Is it not?

- Even waves can create ripples. But an ocean is always

calm on the surface. If it decided it create one

tiny ripple of its own then, nobody can survive that. And, it has, Your Majesty. Just try to protect yourself

from the ripples. Hey, envoy. It's not an achievement to defeat

the deccan kingdoms. My throne is protected by

a sea of army. Before he can reach the walls

of my court he'll suffer defeat, just like an

elephant caught by a crocodile. Do you want me to warn

him the same? Do you want me to warn

him the same? But he's like Lord Vishnu himself. Satakarni is a powerful sovereign. Think before you act, Your Majesty.

- Tell that to your King. This battle is not just against us. You'll be challenging the

Yavana's army, who's our allies. Your army isn't enough to bear

the strength of our army. But you cannot hope to defeat

our ally, the Greek King Parithus. Your army would never

compete with him. He asked me to remind

you that your alliance with those obnoxious foreigners

will be your biggest mistake. Also, to defeat that

young man, Parithus one tenth of our army would

be enough, beware. He asked me to give you my sword. If I did, it would be like

forgoing my empire. I'm asking for his son. If he did, his dynasty

would be at my mercy. My father, Bhoomakudu,

and escaped my wrath. Remind him of all this. Tell him that Amaravati would be

reduced to rubble. Situations were different

back then, Your Highness. Now, Amaravati isn't as feeble