Synopsis: In the mythical continent of Westeros, several powerful families fight for control of the Seven Kingdoms. As conflict erupts in the kingdoms of men, an ancient enemy rises once again to threaten them all. Meanwhile, the last heirs of a recently usurped dynasty plot to take back their homeland from across the Narrow Sea.
Genre: Action, Adventure, Drama
Actors: Peter Dinklage, Lena Headey, Emilia Clarke, Kit Harington
Won 1 Golden Globe. Another 273 wins & 454 nominations.

Snow drifts across the bodies of the fallen dead. Eight

corpses lie frozen on the ground-- men, women, and children,

wearing heavy furs. The wind whips through their long hair.

At the edge of the clearing, WILL (20), a young ranger

dressed all in black, surveys the grim scene from the back of

his gelding. He gathers his reins and guides his horse south.

Will rides hard between the towering pines, his horse’s

He comes to a halt and dismounts beside two tethered horses.

beside a stream, filling their skins with cold water. They

rise and look to the newcomer expectantly.

Ser Waymar is gray-eyed and graceful, with an aristocrat’s

air of command despite his youth. He wears a supple coat of

Will and Gared also wear the black of the Night’s Watch, but

their clothes are far less regal, their leather and fur

battered from hard usage. Gared wears a hood for warmth.

We should start back. They’re all

Gared offers Will his water skin and Will takes a drink.

Not that I saw.

How close did you get?

Close enough to see they was dead.

If Will says they’re dead, they’re

dead. We should head back to the

(with the hint of a smile)

Do the dead frighten you?

Mormont said we should track ‘em.

We tracked ‘em. They won’t trouble

You don’t think Mormont will ask us

He walks toward his horse. Gared and Will exchange a troubled

Moonlight shines down on the clearing, the ashes of the

firepit, the snow-covered lean-to. If there were corpses on

the ground before, they’re gone now.

The three riders enter the camp. Their horses seem spooked,

as if they smell a predator nearby.

Your dead men seem to have moved

Will looks around, confused. He knows what he saw.

Spotting something shimmering on the ground near the firepit,

he walks his horse closer, dismounts and looks down.

Lying at his feet is the hilt of a steel longsword. The blade

has been shattered into a thousand shards.

Will stares at the shattered sword. He knows what this means;

the dread on his face is unmistakable.

From his horse, Gared looks at the ground. The indentations

where the bodies once lay are still visible-- as are the

faint but unmistakable footprints leading away from them.

We have to move. Now.

He is interrupted by a neigh. Will’s horse, riderless and

panicked, bolts from the camp site.

Ser Waymar’s horse rears back on its hind legs, throwing its

rider to the ground before galloping after the first horse.

Gared struggles to keep his own horse under control. Ser

Waymar stands unsteadily, brushing the snow from his cloak.

He’s staring into the darkness at the edge of the clearing.

Ser Waymar turns to see what the young tracker sees: a shadow

emerging from the forest.

A figure steps into the moonlight, tall and gaunt, with flesh

pale as milk. It slides toward the rangers on silent feet.

Its armor appears to be carved from ice. Its sword is

translucent, a shard of crystal so thin it almost seems to

Stay where you are!

The OTHER keeps coming. Ser Waymar draws his sword with

trembling hands. Will, standing near the fire pit, and Gared,

still on horseback, draw their own swords. 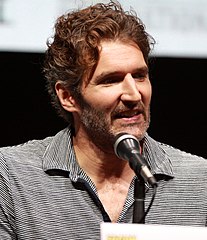 Submitted by acronimous on February 24, 2016