Synopsis: A documentary about the lengthy development of the Don DeLillo screenplay "Game 6" and how this period-piece dramedy, set in New York City in 1986, was finally brought to the screen as an independent film for $500,000 in 2004.
Genre: Short
Director(s): Michael Fiore
Actors: Griffin Dunne, Ari Graynor, Bill Groom, Michael Hoffman
Collection  Edit  Watch  PDF  Buy

STEVEN SCHWIMMER, a drama critic, asleep on his bed. He

The bed is a mattress on a makeshift platform.

Papers strewn on the floor.

A desk with and old manual typewriter, reference works,

A cast-off sofa with pants, shirts, sweater, underwear and

socks tossed haphazardly on the cushions and arms.

A counter that sets apart the kitchen area. A portable TV set

on the counter. The remains of dinner for one.

A row of stacked cardboard boxes with mail spilling out on

the floor. Boxes are labeled in crayon: HATE MAIL.

rounds of ammunition scattered next to a Llama Comanche .357

and a quarter inches.

and dented -- scavenged from a construction site.

A snapshot on the bedside table. It's a blurry picture of

Steven holding a cat. Steven wears a peaked cap, and a shadow

falls across his face. Next to the picture is a clock radio,

which comes on with a buzz as the clock shows nine AM.

Traffic flowing smoothly on the

Deegan right now but if you're

lucky enough to have a ticket for

tonight's game, be sure to leave

early because it's going to be

Steven does not stir.

Another day of traffic. Traffic

everywhere I look. Cars stop and

the wheel thinking their thoughts.

The shimmering glass facade of the United Nations Plaza

Apartments at 48th Street and First Avenue. A man visible at

a window on one of the high floors, a cup of coffee in his

light. Traffic on the major

arteries and traffic in the little

From his POV we see the traffic below creeping along, nearly

Birth and death, walk and don't

The man takes a sip of coffee.

tomorrow. Bumper to bumper, soul to

soul. This is Lone Eagle over and

The same man -- the playwright Nicky Rogan with his hand in

the air, hailing a cab. He is forty-five, vigorous, wearing

In a corner of the screen --

I used to drive a taxi.

Where you're going, mister?

I used to drive a taxi. 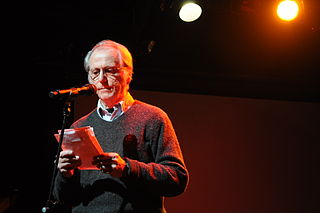