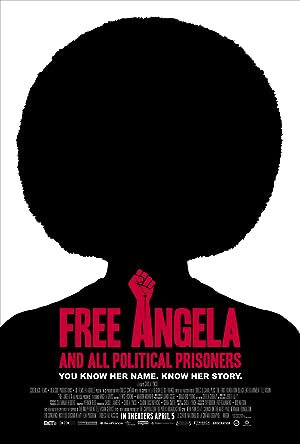 Free Angela and All Political Prisoners

Synopsis: A documentary that chronicles the life of young college professor Angela Davis, and how her social activism implicates her in a botched kidnapping attempt that ends with a shootout, four dead, and her name on the FBI's 10 most wanted list.
Genre: Documentary
Director(s): Shola Lynch
Actors: Angela Davis, Eisa Davis
Production: LionsGate/CodeBlack Films
2 wins & 4 nominations.

a judge and three other persons

were shot to death today

by a group of convicts to escape.

There are still a great many loose ends

and a great deal of speculation

about what happened here.

Investigators will now try to determine

if there was a conspiracy of some kind

than those who actually

participated in the bloody event.

Today, it turned out that two of the guns

used in the courtroom

were bought by Angela Davis.

She was the teacher fired from the

University of California at Los Angeles,

after she said, yes, she was a communist.

I grew up in Birmingham, Alabama.

I think we all realized that this was not

the way things were supposed to be.

And my mother used to say that.

My father had guns in the house.

And we all knew that when they came out,

generally, it was in response to some threat.

As much as I wanted to see change happen,

I left the South precisely at the moment

was about to take place.

I discovered a new program

to bring black students from

the segregated South to the North.

So, I didn't get to directly experience,

you know, all of the protests in Birmingham.

and went to Brandeis. There were

And then, of course,

I ended up studying in Germany

when these new developments

in the black movement happened,

the emergence of the Black Panther Party.

And my feeling was that, "I wanna be there.

"This is earth-shaking. This is change.

I wanna be a part of that."

Revolution is about thinking about

things in a radically different way.

And, I think, given the history of America,

the idea that black people

should be equal, and really equal,

was a revolutionary thing.

In America, black people are treated

very much as the Vietnamese people.

And the police, they are not to...

are not to promote our welfare,

or our security and our safety.

But they are there to contain us,

to brutalize us and murder us.

Do you know what Black Power means?

The fact is that some of our fellow

citizens have turned against our society

and turned against our government.

People, perhaps, that you do not see,

and the fact you can't get a job. Only

40% of the men that live in the ghetto

have jobs that pay more than $60 a week.

How can you support a family?

How can you bring up children in dignity?

if you look at their 10-point program,

And the point that everyone remembers

The Panthers, they not only had guns,

they wanted you to know they had guns.

Exhibit A was when they burst into

a session of the state legislature.

The Black Panther Party for Self Defense

calls upon the American

and the black people in particular,

of the racist California legislature

which is now considering legislation

aimed at keeping the black people

agencies throughout the country

are intensifying the terror, brutality,

murder and repression of black people.

All of these police were summoned,

and what they found

the Panthers were not breaking any law.

I saw the photograph of the

Black Panther Party in some newspaper

when I was studying in Germany.

And again, I had this sense,

"The world is changing.

Shola Lynch is a filmmaker, artist and former athlete. She is best known for her films Chisholm '72: Unbought and Unbossed (2004) and Free Angela and All Political Prisoners (2013), both of which focus on African- American women and political history. She is a member of the Academy of Motion Picture Arts and Sciences. more…