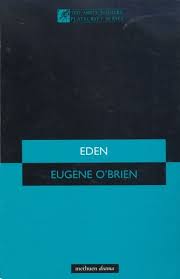 A LARGE OAK TREE in the early morning sun, moves slightly in

the SQUARE OF A PROVINCIAL TOWN. He is lost in his own world,

his eyes squinting against the rising sun. He is bleeding

from a cut to his forehead.

We HEAR CHURCH BELLS in the distance.

Billy LOOKS towards 'THE COPPER BEECH' NIGHTCLUB as he passes

The TERMINUS of the grand canal.

A FEW BOATS tied up.

Billy continues to shamble along, mumbling to himself.

Nothin' ever hard about me. Nothin'

Billy reaches a BENCH and slumps down onto it, out of frame.

Billy drops to his knees in the room. He looks to the

His wife, BREDA FARRELL (33), and his two very upset looking

Billy closes his eyes to fight back the tears, and wipes a

trickle of blood from the cut on his forehead. He opens his

e yes and looks up at something above him.

A PAINTING of a bright sunny sky and field of long grass.

gathered around it who look like something out of the

We PULL BACK from the painting to REVEAL

BILLY, STARING up at it.

We CONTINUE TO MOVE over Billy's head and across the

A field of long grass.

We SLOWLY TILT UP to reveal the LARGE OAK TREE, moving

slightly in the breeze.

tree. As we MOVE CLOSER we TILT up to the sky.

We MOVE across the sky to reveal Billy, dressed in BLUE

'EIRCOM' OVERALLS, sitting on top of a TELEGRAPH POLE. He is

completely lost in thought, staring out at the wide expansive

holding up to his ear. After a moment we HEAR the MUFFLED

SOUNDS OF A MAN AND WOMAN TALKING.

Listen to me, there was two of us

They make KISSING NOISES to each other and hang up.

Billy smiles to himself and goes back to his reverie.

cool himself down. He then brushes back his wet hair with a

COMB. He removes his work overalls and reaches for a BEN

SHERMAN SHIRT from the back of the van and puts it on.

t owards a town in the distance.

Eugene O'Brien is an Irish playwright, screenwriter, and actor. more…

Discuss this Eden script with the community: