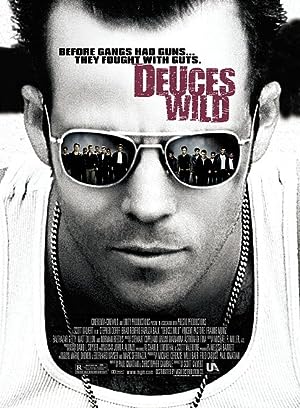 Synopsis: Two brothers, Leon and Bobby are members of the street gang in Brooklyn known as the deuces. Their brother was killed by a drug overdose a few years earlier and the gang is determined to keep drugs off their block. Another more vicous gang known as the vipers is a possible threat to Leon and Bobby's efforts. The deuces are determined to do whatever is necessary to keep drugs off their block even if that means dying.
Genre: Action, Crime, Drama
Director(s): Scott Kalvert
Actors: Stephen Dorff, Brad Renfro, Fairuza Balk, Norman Reedus
Production: MGM
1 win & 1 nomination.

I told you|not to sell him drugs.

The year the Dodgers|left Brooklyn.

The summer|Dion and the Belmonts...

were blasting|out of every car radio...

and the summer|that I first fell in love.

It was the summer|Marco Vendetti...

and the streets of Sunset Park|ran red with blood.

My brother Leon started a gang|called the Deuces...

after our brother Alley died.

Our job|was to protect the block.

But it was a local mob guy|named Fritzy...

He pretended to be|everybody's best friend.

Get yourself an ice cream.

But he was only in it|for himself.

On the corner of Sixth Street|and Second, the Deuces ruled.

We hung out at a candy store|called Willie's...

where we ran bootleg cigarettes,|illegal fireworks...

and did a little bookmaking|on the side.

What, did he throw it|underhand?

I told 'em. They ain't gonna|win in Los Angeles.

Go on. F*ck the Dodgers.

Get over it. They left.

My cousin Antoinelle,|out in Bayridge.

Another cousin gettin' hitched?|How many more are there?

People do get married, Leon.

It is somethin' people do,|you know.

Willie, is it suddenly|gettin' hot in here or what?

Oh, so what do you|want to do tonight?

You know whose turf this is?

This is Deuces turf.

You fuckin' listenin' to me?

What are you doin'?

I think he's one of them|Garfield boys or somethin'.

This ain't a Garfield boy.|He don't hang with no peewees.

You hit one person a year,|it's a deaf kid.

Well, how the f*ck|am I supposed to know?

His mother should hang a sign|around his neck or some shit.

You missed a spot.

Hey, Father. You wanna|come up here and help me?

I thought you should know.

Give me your word|nothing's gonna get outta hand.

Give me some more|of that polish, Scooch.

You know the first thing I'm|gonna do when I get outta here?

a slice of sicilian,|a nice piece of ass...

and find that rat motherfucker|who sent me here.

from ear to ear.

Mark the son of a bitch.