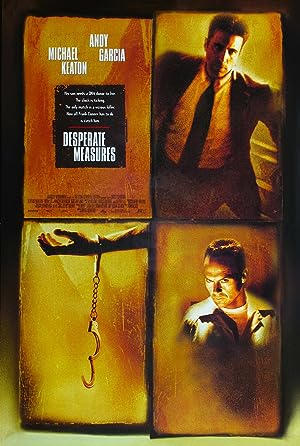 Synopsis: San Francisco police officer Frank Connor is in a frantic search for a compatible bone marrow donor for his gravely ill son. There's only one catch: the potential donor is convicted multiple murderer Peter McCabe who sees a trip to the hospital as the perfect opportunity to get what he wants most: freedom. With McCabe's escape, the entire hospital becomes a battleground and Connor must pursue and, ironically, protect the deadly fugitive who is his son's only hope for survival.
Genre: Action, Crime, Drama
Director(s): Barbet Schroeder
Actors: Michael Keaton, Andy Garcia, Brian Cox, Marcia Gay Harden
Production: Sony Pictures Home Entertainment
1 win.

This is our last shot.

with those television appeals.

If they all go away, we're finished.

Don't even think about it.

He crushed his cell mate's legs, so they|put him in solitary through the year.

No formal education beyond the ninth|grade, but he has an IQ of over 150.

I appreciate what|you're doing for me.

Buried them alive,|used their uniforms and l.D.s.

If he'd done it two years later, they|would've put him in the gas chamber.

This is a mistake, Frank.

I have no choice.

You have a visitor.|Get dressed.

I have to warn you not just about|the physical danger...

because he's already killed one prisoner|and crippled another.

He likes to f*ck with you.

You know why I'm here.

My son has leukemia.

He will die|without a bone marrow transplant.

I've been identified|as a compatible donor...

I was told you volunteered.

You lied to me, Frank.

You were identified by a computer match.

I broke into the FBI computer system.|I violated state and federal statutes.

Grounds for dismissal|from the police force.

That's right.|Give me a shot.

I went through all the other registries,|and there's nobody.

You're our last chance.

Why do I care about your son's life?

Am I supposed to find redemption|in the eyes of God?

Do you want redemption?

You think I do?

You brought it up.

Don't try to get inside my head,|Frank.

If I want you in,|I'll send you an invitation.

Sorry. I thought|you were opening a door.

But I cannot make myself|feel bad about it.

I cannot imagine a god who would care.

I put my faith in the power|of my own mind.

Which is all I own|after half a life of incarceration.

I can appreciate that.

Then maybe you can appreciate|my amusement...

after all those years being locked up,|I'm given the opportunity to kill again.

All I've got to do is stay here.

What do you want from me?

-Have you been a good father to the boy?|-I've tried.

You tried.|Isn't that nice you tried?

Yep. Even my daddy can say that.

Beat the shit out of me every day,|but he tried.

I'm sure you didn't.

You still wear a ring.

You feel responsible in some way|for her death?

She died in a car accident.

I'd wonder about myself, too.

Will you do it?

Will you give my son your bone marrow?

I'll have to think about that,|get back to you.

No. Tell me right now.

Because I haven't told him|that his cancer is back.

And when he went into remission...

he wouldn't even|let himself celebrate...

'cause he knew the odds.

And when I go back, I'm gonna tell him|that his cancer is back...

and that he will die if he doesn't get|a bone marrow transplant.

I want to tell him|that I found that donor.

To make it easier for him,|and to save his life.

Well, since you have to know|right now, Frank...

David Klass is an American screenwriter and novelist. He has written more than 40 screenplays for Hollywood studios and published 14 young adult novels. His screenplays are primarily character-based thrillers for adults, while his novels often tell the stories of teenagers in crisis. more…