Dark, ominous clouds of smoke. A beat of semi-calm.

And then... A long blast of TRACER FIRE cuts through.

A city on fire. A block here, block there. More TRACER

FIRE. A cross between the LA riots and Gulf War. A

SUPERED TITLE:
LA RIOT III. And then FADING IN BELOW:

MONTH 4. We CONTINUE MOVING ABOVE the ravaged city --

they had to fly choppers through

Gliding totally silently INTO FRAME is the biggest,

gold letters on the side -- LAPD. Fully armored beneath.

Woven kevlar on the sides. BULLETS REBOUND with a long

ZZZZZIP off the sides. PING SOFTLY off the plastic armor

I don't understand where we're

going and why the hell we're

A new voice responds. This one brooks no discussion --

Because there's anger and there's

frustration, and then there's pure

JOHN SPARTAN peers down into the fiery landscape.

Where we're going is pure f***ing

Thirty people who were riding that

got this bad hunch about who took

them and where they are...

Way up ahead, amid the flames, is a fortress. A square

city block. Walled. Something out of the middle ages.

The walls are entirely made from stacked abandoned cars.

Spartan is dragging a heavy bag up towards the door.

PILOT #2 looks at him curiously.

How come they call you Demolition

Man? Are you with the bomb squad?

Spartan gets his bag into position.

He checks out the window. They're not quite there.

The PILOT takes a thermogram of the building in the

middle of the compound. We see a series of heat-outlined

Six. One still, in the middle.

The rest moving around. I don't

To the naked eye, out the window, tucked against the

wall of cars, a large tarp. To the thermo, the still

warm inner workings of the muni bus. Faint outlines of

the engine, drive train, even seats and frame. Bingo. 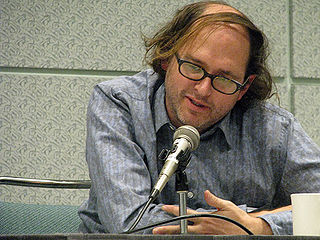 Daniel "Dan" Waters is an American screenwriter and film director. He is the older brother of director Mark Waters. more…