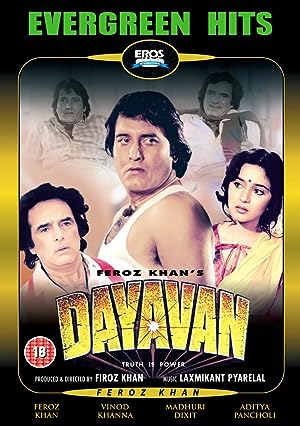 Synopsis: This is the story of two childhood buddies who grew up on the wrong side of the tracks in a shanty town. One of them (Vinod Khanna) becomes a sort of 'godfather' for the locals. One day he is taken to a brothel by his friend (Feroz Khan), where he meets a young prostitute (Madhuri Dixit). He is impressed by her ambition to educate herself and she is impressed by his honorable nature. They fall in love and get married the next day. However, their happiness is short-lived, as the gangster lifestyle begins to take its toll.
Genre: Action, Crime, Drama
Director(s): Feroz Khan
Actors: Vinod Khanna, Feroz Khan, Amala Akkineni, Amrish Puri

Thousands of people | are born every day...

...and thousands die too.

Some of them | create history...

...while some die | without any recognition.

At times, there are people...

...who make themselves immortal | not in history...

There was one such man. | His name was... Dayavan.

Why are you hitting him?

Sir, this boy is the son of the | murderer who is absconding.

He knows his father's whereabouts | but he refuses to disclose it.

Aren't you ashamed of beating | such a small kid?

Do not be scared, son. I won't | let your father be harmed.

Tell him to go and inform his | father that he will be spared.

Sir, the real murderer is the | village head, an influential man.

We cannot take any action against | him. And if we don't even...

...nail this boy's father, | how'll we answer our superiors?

We need not | lose sleep over it.

See how easily we nailed him~ Our | superiors won't question us now.

We'll report that he was | killed in a police encounter.

The son has himself closed the | chapter of his father's life.

Hey, look~ Our breakfast | has been taken care of.

Let's snatch it | from him~

It appears to be | made of pure gold

You swine. So many of you're | hitting out at one chap?

Leave him, you jerk. | Get lost

How dare you | victimise a lone boy?

Show me your | guts, if you can

The creeps are running | for their lives now

Did they rob you | of your food?

You don't understand Hindi? | So you're a South Indian

I can understand your | Madrasi language a little bit

Tell me your name

Yes, I understand a bit of your | mother tongue. What's your name?

So your name is Shakti.

How strange of you~ They ask for | it, and you give it to them.

Why were you quarelling then?

It's made of brass. It's more | precious than one made of gold~

How can brass be more expensive | than gold? Are you new in Bombay?

You did not fail | in your exams.

Then did you have a | showdown with your parents?

You don't have a mother, a father, | or a house? That's interesting.

Why have you come | to this metropolis?

You killed a policeman~

In that case, you are | much smarter than I am.

The police killed his father | in a false encounter.

And he killed the policeman | in retaliation.

Even his food has been | snatched away by ruffians.

Eat whatever there is.

Won't you offer me | something to eat?

Give him some foodstuff.

Why do you feel shy? | Feel free to eat what you like.

You're gobbling food like mad. | Why don't you feed him too?

You visit the mosque daily, | read prayers 5 times a day..

.. you are so religious-minded. | And yet indulge in such activity.

Is it advisable? | He wants to know~

If your work leads to some good | for the people around you...

...I don't consider such an | activity as undesirable.

What delayed you | for so long?

He hasn't turned up, | on this auspicious occasion too.