Synopsis: In Chicago, honor-driven Sgt. Eddie Cusack (Chuck Norris) and his team stake out a drug exchange involving notorious drug czar Luis Comacho (Henry Silva). Cusack is caught off guard, however, when rival Mafia kingpin Tony Luna (Mike Genovese) and his disguised crew show up, unleash a torrent of gunfire on Comacho's crew and make off with both cash and cocaine. Now Cusack must fight both gangs -- and corruption in his own department -- in order to stop the drug war.
Genre: Action, Crime, Drama
Actors: Chuck Norris, Henry Silva, Bert Remsen, Mike Genovese
Production: MGM

Thundering north through the glass canyons of the Loop, the

elevated train SCREECHES through the city awakening. As it

races north across the river past ancient factories giving

way to high rise splendor, lights glistening against the

dawn, we see the complex business of bringing a city to life

On the Near North Side an assortment of revelers are winding

up their night on the town.

The pressmen loiter outside the Tribune loading docks, and

fishing boats are outbound through the Chicago River locks.

A streetsweeping crew moves through the Fulton Market,

At the Merchandise Mart platform the elevated train picks up

The el train RUMBLES north past the aging tenements of Uptown

into the Belmont Avenue Station.

And down below, a garbage truck is slowly working its way up

the alley. A garbage man in city overalls WHISTLES to the

driver and the truck stops. He rolls a can to the grinding

jaw as the driver sits, tense and alert, scanning the street.

There's something odd about this driver. And the garbage man

too, for that matter.

SPIDER, a nervous looking black man, steps out onto the

platform. As the train pulls away we see him reach into his

shirt pocket and CLICKS his ball point pen a couple of times.

He WHISPERS into it. It is a concealed radio transmitter.

y'all down there cause we got a big

He heads for the stairs and the street below.

The truck cab is equipped with a police radio. The driver,

RICH DONATO, adjusts the volume. Over the SPEAKER, HEAVY

WITH STATIC, we can hear the SOUND of the RECEDING EL TRAIN.

The school bus be waitin.

Donato motions for the garbage man.

EDDIE CUSACK jumps up on the truck's running board and sticks

his head in. On the seat beside Donato is a sledgehammer and

a sawed off automatic rifle. The two men stare at each other

as they concentrate on the CRACKLING RADIO.

Hey, I got it all right here, my

man. Jus be waitin on you.

DOC is at the wheel of a late model Cadillac. Spider gets in

and they pull slowly away from the curb. 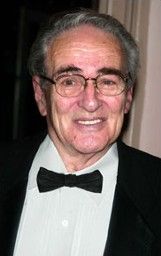 Dennis Shryack (August 25, 1936 – September 14, 2016) was an American screenwriter whose credits included The Gauntlet in 1977, Code of Silence (1985), starring Chuck Norris, and Turner & Hooch (1989), which stars Tom Hanks and Beasley the Dog. Shryack also co-wrote the screenplay for Pale Rider in 1985, directed by Clint Eastwood, which became the highest grossing Western film of the 1980s, taking in the $41 million (the equivalent of nearly $92 million in 2016). Shryack often collaborated on screenplays with other writers, including penning seven films with Michael Butler, as well as partnerships with Michael Blodgett on Turner & Hooch and Run in 1991. more…