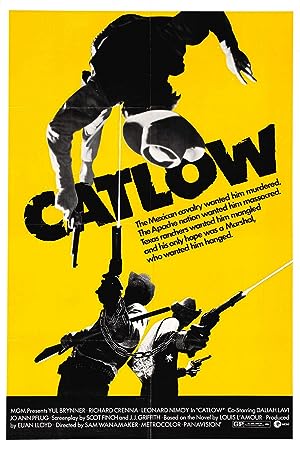 Synopsis: Marshall Cowan and the mercenary Miller are both separately hunting the outlaw Catlow. During the Civil War both Cowan and the always smiling Catlow were comrades. Catlow helps Cowan, when he is wounded in the right leg by an arrow from the Apaches, despite Cowan hunting him. Catlow escapes with help of his gang. Catlow then robes a Mexican gold shipment, worth $ 2,000,000. Catlow flies with the stolen gold through the dangerous territory of the Apaches who besides of Miller, Cowan and the Mexican cavalry, are hunting for him and his gang of outlaws.
Genre: Comedy, Western
Director(s): Sam Wanamaker
Actors: Yul Brynner, Richard Crenna, Leonard Nimoy, Daliah Lavi
Production: Warner Home Video

Discuss this Catlow script with the community: