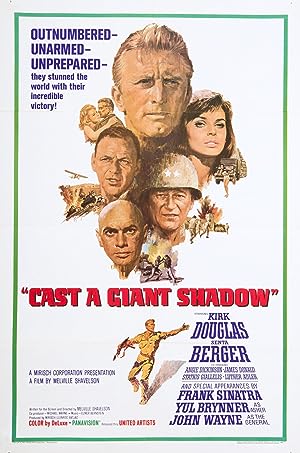 Synopsis: An American Army officer is recruited by Jews in Palestine to help them form an army. The surrounding Arab countries are opposed to the creation of the state of Israel. He is made commander of the Israeli forces just before the war begins.
Genre: Adventure, Drama, History
Director(s): Melville Shavelson
Actors: Kirk Douglas, Senta Berger, Angie Dickinson, James Donald
Production: MGM Home Entertainment

- Our biggest case in two months.|- Almost our only case.

- What's the matter?|- We're being followed, don't look around.

- Some amateur.|- Maybe a process server.

Or a relative trying to make a touch.

My name is Safir, and|my business is private.

Maj. Safir of the Haganah...

...the underground army of the|provisional government in Palestine.

I thought it best not to be seen|at your office.

- Are you sure you want to talk to me?|- Absolutely.

On May 15, the British will withdraw.

We will announce our independence and...

Six nations have promised|to drive you into the sea.

Yes, I read the newspapers.

Have you read their exact words?

"There are 50 million Arabs.

"What does it matter|if we lose 10 million to kill all the Jews?

The Grand Mufti of Jerusalem:

"I declare a holy war.|Murder them. Murder them all. "

We are going to fight.

There's no other place for us to go.

We've come to you because,|frankly, no one else wants the job.

At least you're an honest man|but I've just done a war and a half.

I promised the next war to my wife.

I think if I leave home once more,|I'll find my pajamas on the front porch.

Would you give up everything you love|to fight an insane war...

...for a country that'll get|its brains blown out in a few weeks?

If it were my country.

Maybe it's yours, but it isn't mine.

But you're a Jew.

I'm an American, Major.|That's my religion.

The last time I was in|temple, I was 13 years old.

I made a speech and got 42 fountain pens.|I don't have to go again.

I've got enough fountain pens.|Come on. We're a little late.

Colonel, I'm asking you, as an American.

What do you say in your schools|when you salute your flag?

"Liberty and justice for all"?|Is it only for all of you?

Don't give me history lessons!

Six million of our people|have recently been murdered.

My name's Emma. What's yours?

What's my other surprise?

I know I'm breaking a|promise to you, but...

...I'm leaving for Palestine next month.

Military adviser to the underground forces.

But why there and why you?

I happen to know a great deal|about the business of killing...

...and they've been killed by experts.|Somebody's got to help them fight back.

...but I'm so damn tired|of being proud of you.

...but I couldn't turn this one down.

Not these people. Not now, when they...

At least be honest.

You've been out of uniform six months.

If they hadn't come looking for|you, you'd have started your own war.

You have to admit...

...I found a war in a country|that's pretty hard for you to knock.

Wait till I get my hands on|whoever's running the world.

I thought it was your mother.

Don't you think I know|what's going to happen in Palestine?

The end of the world, Mickey.

Ted Berkman (January 9, 1914 – May 12, 2006) was an American author, screenwriter and journalist best known for writing the screenplay for Bedtime for Bonzo. more…