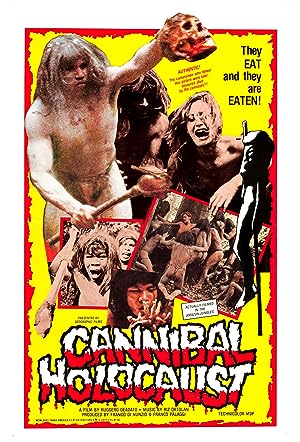 Synopsis: With the intention to venture into the unexplored areas in the deep jungle of the Amazon rainforest at the border between Brazil and Peru, in 1979, a film crew composed of four young Americans attempted to make a documentary about the never seen before indigenous cannibalistic tribes. However, it's already been two months since anyone last heard from the crew, so without further delay, the noted anthropologist Professor Harold Monroe and his rescue team of the seasoned guide Chaco Losojos and his assistant, embarked on a mission to locate them in the depths of the Green Inferno. Following the Yakumos, a tribe that no white has ever seen before, soon enough, the Professor's rescue party will encounter the elusive Yanomamos or Tree People and the fearsome Shamataris or the Swamp People. Eventually, as more evidence is found concerning the fate of the film crew, the Professor will try to recover the raw footage that was paid in blood, and return it to New York to the executives of the Pan
Genre: Adventure, Horror
Director(s): Ruggero Deodato
Actors: Robert Kerman, Francesca Ciardi, Perry Pirkanen, Luca Barbareschi
Production: F.D. Cinematografica

Nothing is impossible for him.

What seemed to be a unthinkable undertaking yesterday

The conquest of the moon for example

Who talks about it anymore?

Today we are already on the threshold

of conquering our galaxy.

And in the not to distant tomorrow

We'll be considering the conquest of the universe.

And yet man seems to ignore

the fact that on this very planet

there are still people living in the stone age

where the prevailing law is survival of the fittest

And this jungle which its inhabitants refer too,

as the Green Inferno

Is only a few hours flying time

was it to remind us that four brave Americans

went there to make a documentary on life in the jungle

was it also to remind us for instance

that before venturing into space

we should become more acquainted

with the planet that we live on.

children of the space age...

armed with cameras, microphones, and curiosity.

for his documentaries on

and their two cameramen, inseparable friends,

Four youngsters who never came back.

But let's have a look at them

at the beginning of their incredible adventure.

Here at the border between Brazil and Peru.

They are about to board a plane

to take them to the Rio Ocoro.

A last outpost from which they will continue on foot.

Deep into the Amazon Jungle.

Into the area known as the Green Inferno.

Hey, are you really not scared?

Not at all... I have been in plenty

of dangerous places with them.

What about you, Alan?

Well there's only one thing scares me.

He'd take me to the North Pole to put it off...

I'd say you succeeded this time too.

And this last time.

Yes, provided we come back in one piece.

Well you four are certainly the first

to embark on such an adventure.

There was a expedition in 59 and another in 67

And neither of them came back.

Yea that was Smith and a bunch of Frenchman.

Yea, Frenchman, they were amateurs

and a bunch of jerks.

They never succeeded in doing anything.

For us the difficult doesn't exist.

We have Felipe our guide.

Those are the last pictures we have of them.

since they were last heard from.

Are they still alive?

And if so - where are they?

These are the questions that

the rescue team sponsored by

New York University and the

Thank you for accepting Professor Monroe.

Has taken part in various expeditions

But this will be his first journey into Amazonea...

Look at what he's carrying...

Once it hits the bloodstream,

there is nothing one can do...

Better a bullet than a dart

But we gave him the serum

at the right time.

It only works half the time...

If it isn't already too old

by the time we get it.

The guys wouldn't give a shit

after the death of Oliveira.

And they are right.

In a short while the American is arriving...

passport into the Green Inferno.

Here you are Lieutenant...

Gianfranco Clerici [dʒaɱˈfraŋko ˈklɛːritʃi] is an Italian writer of numerous screenplays for Italian film and television productions.He has collaborated with several directors of exploitation cinema, including Lucio Fulci and Ruggero Deodato. Many of his scripts went on to become controversial films. more…

Discuss this Cannibal Holocaust script with the community: