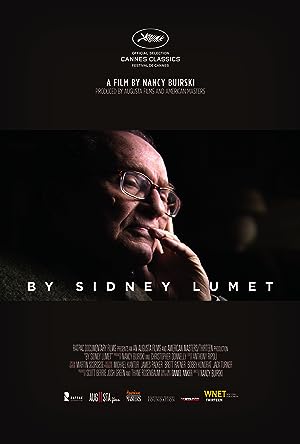 Synopsis: In BY SIDNEY LUMET, film legend Sidney Lumet (1924-2011) tells his own story in a never-before-seen interview shot in 2008 produced by the late filmmaker Daniel Anker. With candor, humor and grace, Lumet reveals what matters to him as an artist and as a human being. The documentary film features clips from Lumet's films - 44 films made in 50 years - including 12 ANGRY MEN (1957), THE FUGITIVE KIND (1960), SERPICO (1973), DOG DAY AFTERNOON (1975), THE VERDICT (1982), to name only a very few. Filmmaker Nancy Buirski (Afternoon of a Faun, The Loving Story) combines these elements to create a portrait of the work and life of one of the most accomplished and influential directors in the history of cinema. BY SIDNEY LUMET illustrates the spiritual and ethical lessons at the core of his work. First and foremost a storyteller, Lumet's strongly moral tales capture the dilemmas and concerns of a society struggling with essentials: how does one behave to others and to oneself?
Genre: Documentary
Director(s): Nancy Buirski
Actors: Sidney Lumet
Production: American Masters Pictures
1 nomination.

remember that this has to be 12 to nothing either way. That's the law. OK, are we ready? All those voting guilty,

day just outside of Calcutta, as the train was pulling

out of the station-- and they were those British

kinds of cars with the center aisle, entrance on

either side, but also individual compartments opening

up with their own doors-- and I was looking

out the window. And there was this little

girl, I guess she was about 12, standing on the platform, and

in the car behind me, a GI, I don't know who, reached out

and swept her off a platform and pulled her into

the compartment that he was riding in. And I was so shocked. I couldn't believe it. And then wrestled

with it for a moment then got up and started making

my way to the car behind me and pulled that door open. And there was a guy,

like that, blocking him. And there were a bunch

of GIs fucking her, just passing her from one to

the other in the compartment and paying for it. And the guy he

said, you want some? It'll cost you whatever. And I said, no, and then

the whole wrestle with do I do anything about this? I'm not directing

the moral message. I'm directing that

piece and those people. And if I do it well, the moral

message will come through. COP 1 : This is car 2118. Call Greenpoint

Hospital and tell them we're bringing in a wounded cop. COP 2 (ON RADIO):

All right, 10-4. Thanks a lot. [siren] [phone ringing] Eighth Precinct. Yeah. Jesus Christ. Guess who got shot. Serpico. You think a cop did it? I know six cops

said they'd like to. I wouldn't deny that morality

in my movies for anything. I know it's there. The difference between

what we're talking about is you think it's

a conscious choice and I say it's an

unconscious choice. I don't pay any attention to it. [music playing] I had no hint whatsoever

that I wanted to do movies. I've got a very

happy disposition, that as long as I'm at

work, I'm perfectly content. I would have been completely

happy to spend the rest of my life in television. I'm glad it went in

another direction because I had a much better

and bigger canvas to work on, but it wasn't a

necessity at all. If you talk to anybody who's

had any sort of career in, I don't know what

over and over again is luck. You did a wonderful

job, wonderful. SIDNEY LUMET: On one of

the shows that I was doing, a show called "Danger," which

had found a very good writer by name of Reginald Rose. Reggie wrote "12 Angry Men." It was done on, I believe

it was Philco on NBC and had been a successful

television show. When he had the offer to make

it a movie, he jumped at it. The offer came from

Henry Fonda, who was producing at that

time, wanted to start producing his own movies. And here again,

luck came into it. I had been working with Reggie

on live television stuff. We liked each other enormously

and he said to Hank, listen, you know who I'd love to have

direct this, mentioned me. Before I had gotten

into television, I was running a workshop

down in the Village. It was called the

Actor's Workshop. Two of the people in the