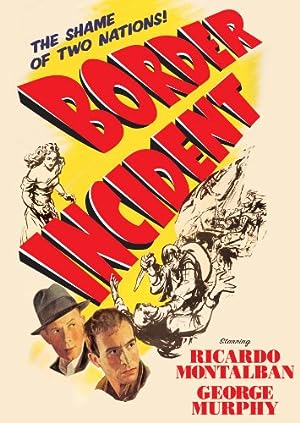 Here is the All-American Canal.

It runs through the desert for miles

along the California-Mexico border.

A monument to the vision of man,

the canal is the life-giving artery of water...

...that feeds the vast farm empire

of the Imperial Valley of Southern California.

Out of this desert wasteland, man's industry

has made a flourishing garden.

is a great industry.

or lettuce or flax or melons...

...may be worth a half million dollars.

This great agricultural empire is important

to the entire United States.

When the crops are ready,

they must be harvested.

...a vast army of farm workers

who must be available when needed.

And this army of workers comes from

our neighbor to the south, from Mexico.

For the Imperial Valley of California...

of the great Southwest...

These workers prepare the land

and harvest the food for our tables.

And so all along the border,

from Texas to California...

Braceros, they are called...

...meaning "those who work

with their hands and arms. "

- are waiting on the Mexican side

...to receive the coveted American

Most of these braceros obey

the laws of both countries...

...and wait at the border to enter

...under the treaty between the Mexican

But there are other braceros who come

and go illegally, who jump the fence.

in the United States for a while...

...and upon returning to Mexico are often

robbed of their savings by bandits...

...who infest both sides of the border.

It is this problem of human suffering

and injustice about which you should know.

is based upon factual information...

...supplied by the Immigration

...of the United States

...the latest of a number

to new and drastic efforts.

...a high official in

one of the PJF's foremost investigators.

...who has just finished a tour of duty

These officials of Mexico

and of the United States...

...arrive for a meeting at

the governor's palace in Mexicali...

from the California town of Calexico.

We are not talking

about bloody shirts or torn hats.

We're not talking about that at all.

We are talking about the people

who lived and died in these clothes.

I know that, sir, but if they cross illegally,

what is our responsibility to them?

Most of my people do not cross illegally.

Those who come over with work permits,

As a matter of fact, most of the ranchers

on our side obey these work treaties.

and pay them legal wages.

These things we know, but some

of my people, they are not well-educated.

to be smuggled across.

I know. And some of my people

pay them half wages...

...conceal them from arrest,

make them live in fear...

...and send them back to the desert

to be robbed and killed.

Since these people work together