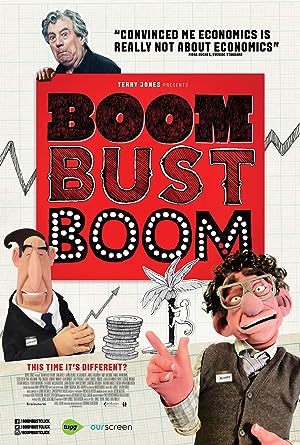 This film is about

of capitalism, how human nature drives the economy

to crisis after crisis time and time again. Every generation

thinks it's smarter than its

parents and its grandparents, and it never proves

to be the case. What happens is a crisis

fades into memory and then it becomes history. That is the reason we often give for why we study history

and why we teach history is to not have to repeat

the mistakes of the past. You ever seen the State of

the Union address where the

president comes on and says, "Guys, we're fucked." These booms and busts

will always be with us. It's in human nature

that they would be with us. And I've said before,

Mr. Deputy Speaker, "No return to boom and bust." ( all cheering ) ( footsteps ) The human strategies

really old. They're kind of leftover

It is very hard to, eh, understand why economists focus on models

could not occur. They run the economy

based on science fiction models. That's why they had no

idea this crisis was coming because they ignored

how lucky we were that we never actually

had to live through

we are cleverer now and we know how to avoid

these kinds of accidents, and actually,

a lot of economists were absolutely adamant that

the worst would not happen because we know how

to deal with these things. And, of course,

the truth is, we didn't know

of the Union address in the following terms: In the domestic field, there is tranquility and contentment... and the highest record of years of prosperity, the great wealth created by

our enterprises and industry, and saved by our economy, has had the widest

our own people. The country can

regard the present with satisfaction and anticipate the future with optimism. ( all applaud ) ( singing ) TERRY JONES: He didn't

know what we know now, that the United States

was about to suffer the worst economic

disaster in its then history. Our economy's healthy

and vigorous, and growing faster than other

have turned in an

economic performance that is the envy of the world. TERRY JONES: He didn't know

what we know now, that the worst crisis ever

to hit the Western economies was just around the corner. The crisis of 2008 is often referred to

as the subprime crash. In less than 15 years,

couldn't afford them. Ladies and gentlemen,

of economic advisers speaking in 2007. The main that innovations

in the mortgage market have done over the

past 30 years is to let in the excluded,

the young, the discriminated against, the people without

a lot of money in the bank to use for a down payment. ( muttering agreement

and affirmation ) JONES: This reckless

lending to people who

subprime lending, but the banks insisted they had eliminated risks

by statistical processing. When you look at how

banks managed risks, particularly before the crisis-- this is very interesting,

and quite funny actually. What they did was

to take risky assets, such as, um,

junk mortgages, slice them into little bits, repackage them