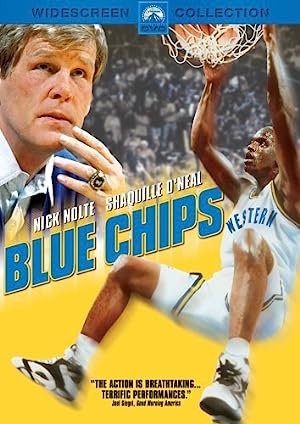 Synopsis: Pete Bell, a college basketball coach is under a lot of pressure. His team isn't winning and he cannot attract new players. The stars of the future are secretly being paid by boosters. This practice is forbidden in the college game, but Pete is desperate and has pressures from all around.
Genre: Drama, Sport
Director(s): William Friedkin
Actors: Nick Nolte, Mary McDonnell, J.T. Walsh, Ed O'Neill
Production: Paramount Home Video
1 nomination.

You gotta bust him out.

All right. come on. now.

How bad can it get?

Just how goddamn bad can it get?

This is by far the worst team|that has ever sat in this locker room.

You son of a bitches.|you don't deserve a locker room.

You don't deserve a locker room.|the way you're playing this year.

You should be playing|without uniforms.

You should be playing|in your jockstraps.

Every time we get ready to play.|I just wanna throw up.

We got hammered the last four games.|and it stops right now!

If you keep playing|the way you're playing.

I'm so depressed|I don't even wanna talk about it.

I'm through fighting.|you sons of bitches!

You're the dumbest team|I ever coached.

You guys think of something.

All right. guys. The guards-

Honest to Christ. I just wanna go home|and cry when I watch us play.

Don't you know how bad|I wanna see this team play?

I wanna see this team play|so fucking bad. I can taste it.

You boys. the only joy|I have right now

is I only have to watch you guys|play two more games.

Let's start thinking about|what we're gonna do out there.

I can't tell you how sick I am|of basketball right now.

I never thought I'd see the day

when Western basketball|is in the state it is right now.

If I never see another game in my life.|that's just fine by me.

Dwayne. you can get through|college half-assed.

Richard. you can get|through life half-assed.

And welcome to the Dolphin Dome|for tonight's game

between the Texas Western Cowboys|and the Western University Dolphins.

Coach Pete Bell for Western|is on the hot seat.

He's in danger of having|his first losing season ever.

but a victory tonight would ensure|a winning season for Coach Pete Bell.

It's gonna be tough. though. because|Texas Western is tournament bound.

They are well-coached|by Rick Pitino.

and they should get up-front court help|from Chris Mills and George Lynch.

It should be a great game.|First-half action coming up.

Dwayne. pick up the ball!

He's going to his left.

Get in front of him.

What the hell's the matter with you?

Goddamn it. we're not moving the ball.|Just standing around. for chrissake.

Let's go to the four-man motion.

If they go to their one man.

don't worry about the big guy.|he's not gonna handle it.

Don't trap four and five.|Only trap one. two and three.

Take him to the hoop!

What the hell is this?

Great call. You're the best.

What in the hell is this? What.|have you got blinders on tonight?

I mean. you haven't|made a call all night.

That's why you're a good official.

What the hell is that kind of a call?

- Explain that to me.|- You've got your last warning.

You sit down.|You've got your last warning.

Ron Shelton (September 15, 1945 in Whittier, California) is an American Oscar-nominated film director and screenwriter. Shelton is known for the many films he has made about sports. more…