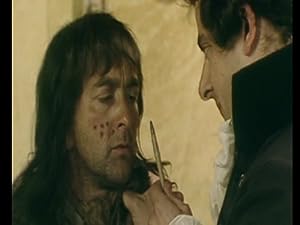 Synopsis: Rowan Atkinson and the cast of legendary comedy series Blackadder are back for this one-off documentary special to mark 25 years since the original BBC transmission in 1983. Featuring fascinating interviews and behind-the-scenes insight from its renowned cast and writers, including the first ever in-depth interview with Rowan Atkinson, on his personal experience of playing Edmund Blackadder.
Genre: Comedy, Documentary
Director(s): Matt O'Casey
Actors: John Sergeant, Rowan Atkinson, Richard Curtis, Ben Elton

Do you have someone special in your life?

No, I mean, someone you love and cherish and want to keep safe

from all the horror and the hurt.

I was travelling on a plane

several years ago and an episode of The Blackadder

came up on the entertainment channels,

and it was the nurse episode from the fourth series with Miranda,

and, as far as I'm aware, it was an episode that I had never, ever seen.

- No, thank you. I only smoke cigarettes after making love.

I'm not a great laugher, sadly, but I might have sniggered at it,

which was my way of saying, "That was very funny."

Remarkably, Blackadder first slithered on to our screens all of 25 years ago.

So tonight, we celebrate the series that sired a comic generation

and a quantum of quotable lines.

- You've really worked out your banter, haven't you?

This is a different thing. It's spontaneous and it's called wit.

We travel by train, plane, boat and automobile to track down

the original cast and creators who'd gone on to conquer

all corners of the known universe.

If you should falter, remember that Captain Darling and I are behind you.

About 35 miles behind you.

We travel from Northumberland...

When we filmed here, it was the first time I'd ever met a camp Geordie.

If ever there was a subject requiring of satire,

it's people blindly going to war.

There were some rather large egos.

I happen to be perfect, but everyone else is just a sort of big-headed twerp.

..to the Horn of Africa.

After Blackadder, I sort of semi-retired really, and I bought

and the land you can see there, up until the hills, that's all mine.

Behind is Christopher Biggins', except the hill further on.

Blackadder, to remind those from another planet,

followed the exploits of the devilishly cunning Edmund Blackadder

and his trustily stupid sidekick, Baldrick.

Eternity and the company of Beelzebub and all his hellish instruments

of death will be a picnic compared to five minutes with me and this pencil.

The pair journey from the mayhem of the Middle Ages...

through the terrible Tudors...

to the gorgeous Georgians...

..ending up in the First World War.

As an historical sitcom, it's timeless and keeps on twisting

and turning its way into the public's affections like...

And your chosen subject.

It's even the backbone of school history lessons.

Now who's heard of Blackadder?

I want to be remembered when I'm dead.

I want books written about me, I want songs sung about me,

and then, hundreds of years from now, I want episodes from my life

to be played out weekly at half-past nine

by some great heroic actor of the age.

Now, for the first time, Blackadder himself, Rowan Atkinson,

and producer John Lloyd are re-tracing the story of the show,

a story that began at Oxford University, where a young Atkinson

I did nothing of a theatrical nature

in my first term at Oxford.

You know, I was just relishing the whole,

you know, slightly olde-worlde, you know, privileged nature of the place,

and going to endless organ recitals. I was a great lover of the organ.