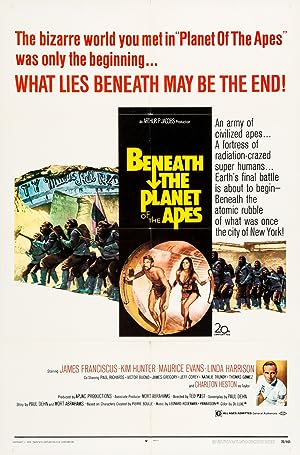 Beneath the Planet of the Apes

Synopsis: Brent is an American astronaut, part of a team sent to locate missing fellow American astronaut, George Taylor. Following Taylor's known flight trajectory, the search and rescue team crash lands on an unknown planet much like Earth in the year 3955, with Brent being the only survivor of the team. What Brent initially does not know, much like Taylor didn't initially know when he landed here before Brent, is that he has landed back on Earth in the future, in the vicinity of what was New York City. Brent finds evidence that Taylor has been on the planet. In Brent's search for Taylor, he finds that the planet is run by a barbaric race of English speaking apes, whose mission is in part to annihilate the human race. Brent eventually locates some of those humans, who communicate telepathically and who live underground to prevent detection by the apes. These humans, who are in their own way as barbaric as the apes, want in turn to protect their species. Brent has to figure out a way to save hi
Genre: Action, Adventure, Sci-Fi
Director(s): Ted Post
Actors: James Franciscus, Kim Hunter, Maurice Evans, Linda Harrison
Production: 20th Century Fox

Paul Dehn (pronounced “Dane”; 5 November 1912 – 30 September 1976) was a British screenwriter, best known for Goldfinger, The Spy Who Came in from the Cold, Planet of the Apes sequels and Murder on the Orient Express. Dehn and his partner, James Bernard, won the Academy Award for best Motion Picture story for Seven Days to Noon. more…

Discuss this Beneath the Planet of the Apes script with the community:

Beneath the Planet of the Apes