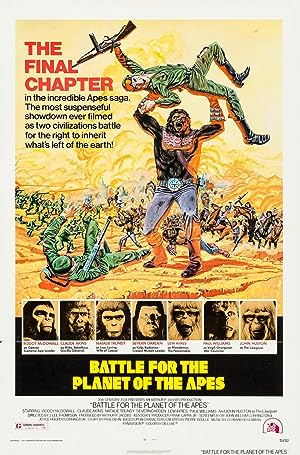 Battle for the Planet of the Apes

Synopsis: After conquering the oppressive humans in "Conquest for the Planet of the Apes", Caesar must now keep the peace among the humans and apes. Gorilla General Aldo views things differently, and tries to cause an ape civil war. In the meantime, other human survivors learn of the ape city, and decide they want to take back civilization for themselves, thus setting the stage of warring ape factions and humans.
Genre: Action, Sci-Fi
Director(s): J. Lee Thompson
Actors: Roddy McDowall, Claude Akins, Natalie Trundy, Severn Darden
Production: 20th Century Fox
1 nomination.

In the beginning|God created beast and man...

But in the fullness of time,|evil men betrayed God's trust..

and in disobedience|to his holy word...

not only against their own kind..

but against the apes,|whom they reduced to slavery.

Then God, in his wrath,|sent the world a savior...

who descended on Earth|from Earth's own future.

And man was afraid..

for both parent apes possessed|the power of speech.

So both were brutally murdered

But the child ape survived..

and grew up to set his|fellow creatures free...

from the yoke of human slavery

Yet in the aftermath|of this victory...

the surface of the world|was ravaged...

by the vilest war in human history

The great cities of the world|split asunder...

And out of one such city...

our savior led a remnant|of those who survived...

in search of greener pastures...

where ape and human might|forever live in friendship...

according to divine will.

His name was Caesar...

and this is his story|in those far-off days.

You're not gonna make it, Jake.

I'll show you how.

You will call me by my proper rank-|General!

Don't put him in the corral.|I won't be long.

Gorillas, read me what I've written.

Shall ape ever kill man?

Come and read this to the class.

You won't because you can't..

and you can't because|you don't want to learn..

and it is my duty to|report this to Caesar.

If my father were a gorilla...

we'd all be learning|riding instead of writing.

Remember, you are|Caesar's son and heir.

though in human history..

quite a number of military dictators|seem to have thought so.

Now, all of you take up your charcoal sticks|and your parchments...

and copy down what I've written

The best shall be hung|from these hooks.

I can think of better things|to hang from those hooks.

But, Virgil, can we|tamper with time?

Accept my premise.|- What premise?

That since man once learned|to travel faster than sound...

he could later have learned to travel faster than light.|- We accept.

Imagine a musician|giving a live broadcast...

from what was once London to what|was once New York on a Wednesday.

He then travels faster than light...

from London to New York...

where he arrives-|as physicists would confirm...

on the previous Tuesday,|listens to his own broadcast on the Wednesday...

then travels back|faster than light to London...

in time for him to decide|not to give his broadcast.

Teacher, have you|forgotten your own name?

Everyone has always called me|Teacher that I had forgotten.

Thank you, Cornelius.|That was a very kind thought.

let's start with you.

this is barely legible|and will have to be written again

Your capital "A" leans over|like a tent in a high wind.

In all our years|of slavery to mankind...

the word "no" was the one word|we were electrically conditioned to fear.

John William Corrington was an American film and television writer, novelist, poet and lawyer. He received a B.A. degree from Centenary College, in 1956 and his M.A. from Rice University in 1960, the ... more…