Synopsis: Away from Her is a 2006 Canadian drama film written and directed by Sarah Polley and starring Gordon Pinsent, Julie Christie and Olympia Dukakis. The feature-length directorial debut of Polley, the film is based on Alice Munro's short story "The Bear Came Over the Mountain", from the 2001 collection Hateship, Friendship, Courtship, Loveship, Marriage. It was executive produced by Atom Egoyan (Polley's director in both Exotica and The Sweet Hereafter) and distributed by Lionsgate. It debuted at the Toronto International Film Festival and also played in the Premier category at the 2007 Sundance Film Festival.
Genre: Drama
Actors: Gordon Pinsent, Stacey LaBerge, Julie Christie, Olympia Dukakis
Production: Lionsgate
Nominated for 2 Oscars. Another 62 wins & 38 nominations.

Grant, a handsome man in his 70’s, with a constant twinkle in

his eye, drives down a suburban looking street in a poor area

of a small Ontario town. He consults an address that lies on

the seat beside him. Looks at the houses as he passes them.

Mostly rental houses. Some of the yards are marked by car

tracks, the windows plastered with tinfoil or hung with faded

flags. He finds the address he’s looking for. A small house

on a quiet street. He pulls into the driveway. This house is

much better looked after though still modest. There are

flowers freshly planted. He takes a moment. Stares at the

GRANT’S MEMORY: of a beautiful 18 year old girl. She is

leaning against the rail of a pier overlooking a great lake.

It is windy and cold and raining lightly. The wind blows her

pale blonde hair into her face. She is confident and strong.

She is smiling, staring straight at us. She is yelling over

the wind, a glimmer in her eye. We can’t hear what she’s

She said, “Do you think it would be

fun - Do you think it would be fun

if we got married?”

A younger woman’s voice is heard.

I took her up on it. I shouted yes.

The 18 year old girl grins. She turns away and looks out at

I never wanted to be away from her.

She had the spark of life.

She looks back at us. Right into our eyes.

The image dissolves to white, ski tracks melt over her face.

“Harvest Moon,” by Neil Young plays on the soundtrack.

A bird’s eye view of a snowy, ice covered lake. A couple skis

through frame. We follow their ski tracks in the opposite

direction. To where they came from.

Over our many winters, her hair

went from pale blonde to silver.

That’s all. I don’t think I noticed

Credits over the ski tracks as we follow them. We arrive at a

warmly lit cottage. It is old and large but not ostentatious.

We pause here and then we continue on around their property.

We find FIONA AND GRANT ANDERSSON, skiing together through

their field. Grant is in his 70’s, Fiona in her sixties. They

are both stunning and sexy, with humour in their eyes. We

recognize Fiona as the beautiful girl we saw at the

beginning. She is ethereal, light, and sly. As though always

enjoying a private joke. They pant hard as they ski side by

side, glancing at each other.

They stand in a gazeobo at the edge of the lake, staring at

the sunset over the frozen water. They stare silently,

CLOSE ON Grant and Fiona’s fingers, unlatching their skis

The cottage is warm and comfortable. Rugs crooked on the

floor and cup rings bitten into the table varnish. FIONA and

GRANT are both tastefully dressed. They prepare dinner

together. There’s a sense of easy routine about it. Grant

chops vegetables while Fiona tends the stove. There’s not a

lot of conversation about what they’re doing. As he maneuvers

around her to dump the vegetables into the pan his arms

encircle her waist and he steals the spatula from where she

has left it on the counter.

He hides the spatula behind his back. She turns to look at

him, knowing what he’s done. 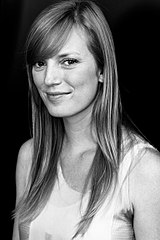 Sarah Ellen Polley OC (born January 8, 1979) is a Canadian actress, writer, director and political activist. Polley first garnered attention for her role as Sara Stanley in the Canadian television series Road to Avonlea. She has starred in many feature films, including Exotica, The Sweet Hereafter, Guinevere, Go, The Weight of Water, My Life Without Me, The Adventures of Baron Munchausen, Dawn of the Dead, Splice, and Mr. Nobody. more…