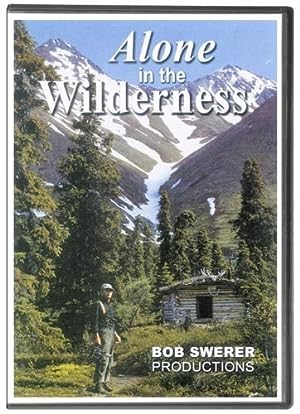 Alone in the Wilderness

Synopsis: Documentary tells the story of Dick Proenneke who, in the late 1960s, built his own cabin in the wilderness at the base of the Aleutian Peninsula, in what is now Lake Clark National Park. Using color footage he shot himself, Proenneke traces how he came to this remote area, selected a homestead site and built his log cabin completely by himself. The documentary covers his first year in-country, showing his day-to-day activities and the passing of the seasons as he sought to scratch out a living alone in the wilderness.
Genre: Documentary
Actors: Dick Proenneke, Bob Swerer Jr., Wendy Ishii, Pamela Guest

It was good to be back in the wilderness again,

where everything seems at peace.

I was alone, just me and the animals.

It was a great feeling, free once more

to plan and do as I pleased.

Beyond was all around me.

My dream was a dream no longer.

I suppose I was here because

this was something I had to do.

Not just dream about it, but do it.

I suppose, too, I was here to test myself.

Not that I had never done it before,

but this time, it was to be a more thorough

What was I capable of that I didn't know yet?

Could I truly enjoy my own company for an entire year?

And was I equal to everything

this wild land could throw at me?

I had seen its moods in late spring, summer and early fall

but what about the winter? Would I love the isolation then,

with its bone-stabbing cold, its ghostly silence?

At age fifty-one, I intended to find out.

Another hundred yards, and I broke out of the brush

to my pile of cabin logs I had cut last July.

I sat down and leaned against them

and while I chewed on a chunk of smoked salmon

my eyes wandered over the peeled logs.

That had been a big job last summer!

Hard work, but I enjoyed it.

It was cool at the timber, and there were

mornings I could see my breath.

I had harvested the logs from a stand of spruce

less than 300 yards from where they were now piled.

The logs were a great deal lighter now than they were then,

and could be handled easy enough.

It was in the late spring of 1968, that Dick Proenneke

decided to leave civilization behind

to live in a pristine land yet unchanged by man.

and to roam a wilderness through

which few other humans have passed.

Twin Lakes, Dick would not only keep daily journals,

but would film his Alaskan autosy with

the help of a tripod-mounted camera.

It was time to be moving on.

I was anxious to get to Spike's cabin

to see if it was the way I had left it last September.

About 500 yards more through the spruce and willowbrush,

and there it was.

the peak of the roof.

A tin can on its stove pipe,

and its windows were boarded up.

The cabin had everything needed to set up housekeeping

until my own cabin was completed.

A good stove, two bunks and a roof that didn't leak.

and the sight of the awakening land.

It seems a shame for eyes to be shut

when such things are going on.

Especially in this big country.

I don't want to miss anything.

to pack my third and last load of gear.

My tools, with which to build my cabin!

This time, with the binoculars along, I would have an excuse

to stop now and then and watch the slopes for game.

From this high vantage point, the hill seemed to come

Almost noon before I got back to the cabin.

The rest of the day, I devoted to my tools.

I carved a mallet-head out of a spruce chunk,

augered a hole in it and fitted a handle to it.

This would be a useful pounding tool.

And I hadn't had to pack it in either.

The same with the handles I made for the wood augers,

the wide-bladed chizel and the files.

Much easier to pack without the handles already fitted to them.

Hope Creek had cut a big opening into the lake ice.

Was it too early to catch a fish?

I took the casting rod along to find out.

It didn't take long, after several casts it happened

with the suddenness of a broken shoelace.

Sam Keith (1921–2003) was an American author. His most notable work was the 1973 best seller One Man's Wilderness: An Alaskan Odyssey, in which he edited and expanded on the journals of his friend Richard Proenneke's solo experiences in Alaska to create an Alaskan classic. In 2014, Keith's formerly lost manuscript First Wilderness: My Quest in the Territory of Alaska was published. Born in Plainfield, New Hampshire, in 1921, Sam Keith was the son of a wildlife artist, Merle Vincent Keith. As a teen, Keith joined the Civilian Conservation Corps and served in Elgin, Oregon, building roads. During World War II, Keith enlisted in the Marines, where he served as a radio gunner. He was shot down over the Pacific. He enrolled at Cornell University after the war on the GI Bill and graduated with a degree in English, with an eye toward being a writer. In 1953, Keith left his Massachusetts home to seek adventure in Alaska. He found a job as a laborer on the Kodiak Naval Base, and there met Richard "Dick" Proenneke, who was working as a diesel mechanic. The two became friends, and during their time in Alaska went on numerous hunting and fishing trips together. After several years, Keith returned to Massachusetts, where he married and became an English teacher, writing on the side. During a trip to visit Dick Proenneke at his cabin in Twin Lakes in 1970, Keith suggested that he take Proenneke's journals describing the time he spent building a cabin on the shores of Twin Lakes, Alaska, and turn them into a book. Keith wrote One Man's Wilderness: An Alaskan Odyssey (1973) based on his lifelong friend’s journals and photography. Re-released in 1999, it became a best seller and won a National Outdoor Book Award. Book excerpts and some of Proenneke's 16mm movies were used in the popular documentary "Alone in the Wilderness", which continues to air on PBS. The two remained good friends, trading hundreds of letters over their lifetimes. The men died within a month of each other in 2003. Ten years later, Keith’s son-in-law, children’s book author/illustrator Brian Lies, discovered an unpublished manuscript by Keith in an archive box in their garage. Forty years after it was written, the story of Keith’s own Alaska experiences was published. Included are photos and excerpts from his journals, letters, and notebooks. more…

Discuss this Alone in the Wilderness script with the community:

Alone in the Wilderness