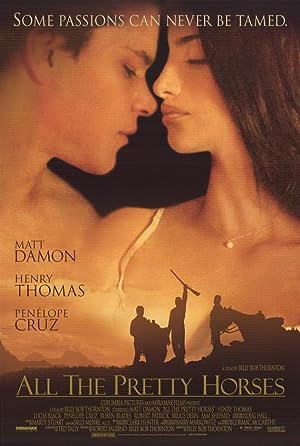 All the Pretty Horses

Synopsis: Two young Texas cowboys on the cusp of manhood ride into 1940's Mexico in search of experience. What they find is a country as chaotic as it is beautiful, as cruel and unfeeling as it is mysterious, where death is a constant, capricious companion.
Genre: Drama, Romance, Western
Director(s): Billy Bob Thornton
Actors: Matt Damon, Henry Thomas, Penélope Cruz, Angelina Torres
Production: Miramax
Nominated for 1 Golden Globe. Another 2 wins & 13 nominations.

You ever think about dying?

You think there's a heaven?

Can you believe there's a heaven|if you don't believe in hell?

I guess you can believe|what you want to.

This ranch has been in my family|as long as anyone can remember.

My granddaddy used to tell me|this was heaven on earth.

Appreciate you lighting them candles.

It wasn't me. It was the lady.

All I ever wanted was to live|out there like him...

I've come to find out Mama|aims to sell it.

Says the oil company would pay|three times what it's worth.

She wants to be in the live theater.

As your granddaddy's only child...

...your mother inherits out right.

It's her property.|She can do whatever she wants.

I don't have any say-so?

What about my father?

You could talk to her.

Well, I have talked to her.

...not everybody thinks life|on a cattle ranch in Texas...

...is the second-best thing|to going to heaven.

She don't want to live|out there, that's all.

If it was a paying proposition,|that'd be one thing, but it ain't.

I could run it.

It's his own damn fault.

Your father signed every|paper she set in front of him.

Never lifted a hand to save himself.

I begged him to get a lawyer.

I'm sorry to have no better news...

...but some things in this world|can't be helped.

I believe this is probably|one of them.

She went back to San Antonio.

I thought the world of that old man.

Don't go crying on me now.

You could talk to her.

Last conversation I had with her...

It ain't her fault.

I ain't the same as I once was.

It's hard to watch people you came|from waste away before your eyes.

When the land is gone too...

...there's nothing to stand on|or stand for either.

When do y'all have to be out?

Closing is the first of June.

You could wait till then.

...you can't ride from one end|to the other in a week.

It ain't all fenced in|and sold off and played out.

If I don't go, will you go anyways?

- Thank you for everything.|- Goodbye.

May God go with you.

Is that you, bud?

- They suspect anything?|- No.

- Late for your own funeral.|- He could be getting milk.

- Somebody on horseback?|- Yeah.

That's a hell of a horse.

- I ain't hunting you.|- Then how come you following us?

I ain't. I'm going to Langtry.|I don't even know who you are.

I know you ain't no goddamn sixteen.

Ted Tally (born April 9, 1952) is an American playwright and screenwriter. A graduate of Yale, he has received awards including the Academy Award for Best Adapted Screenplay, the Writers Guild of America Award, the Chicago Film Critics Award, and the Edgar Award from the Mystery Writers of America. more…

All the Pretty Horses