A UPS Man with a big pot belly is walking down the street, whistling

and carelessly tossing a

package in the air. We hear the sound of broken glass in the box. He

He tosses the box behind his back like a basketball, then acknowledges

UPS, good to see you!

He takes a couple of steps, then flings the package incredibly high

into the air, spins completely

around and expertly drops to one knee and catches the box. A Hispanic

basketball. He runs up the front

steps of the building. He reaches out to open the front door and

behind him and back down the steps.

He goes back, retrieves the package, then enters the building.

Several people stand in the elevator. The UPS Man just makes it, but

the door closes on the

ELEVATOR DOORS OPEN. The UPS Man throws the package out onto the floor

kicking it down the hall like a soccer player. With one last big kick

the parcel lands in front of

APARTMENT 3B. He picks it up and knocks on the door.

We hear a small dog barking.

Shut the hell up, you stupid mutt!

An angry, burly man pokes his nose hairs out the chained door.

UPS, sir. And how are you this

of that is chest hair. A

small Shiatsu stands beside him.

I have a package for you.

The UPS guy thrusts the package toward the man. We can clearly hear

broken glass inside. The

Most likely sir! I bet it was

something nice though! Now... I

haver an insurance form. If you'll

and initial here, and print your name

here, we'll get the rest of the

forms out to you as soon as we

The man begrudgingly begins to fill out the form. The dog wags his

tail and whines. We can see

that he likes the UPS guy.

That's a lovely dog you have. Do

you mind if I pet him, sir?

Before the Gruff Man can finish, the UPS Man stands back up and takes

That's fine sir. I can fill out

the rest. You just have yourself

The UPS Man moves swiftly down the hall and into the stair well.

The Gruff Man shakes the box, tosses it down and sits in front of the

We see the back of the Shiatsu staring at the crack in the front door.

He has not moved an inch.

The Gruff Man looks over.

Hey, stupid! Get away from the

The dog doesn't budge and this really pisses him off. He gets up and

heads for the dog.

What's the matter with you, I said

He roughly picks the dog up by the scruff of the neck, but as he turns

it around we see that it is a

stuffed dog. Around it's neck is a business card that reads, "You have

been had by Ace Ventura - 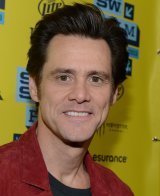 James Eugene "Jim" is a Canadian-American actor, comedian, impressionist, screenwriter, and producer. He is known for his highly energetic slapstick performances. Carrey first gained recognition in 1990 after landing a recurring role in the sketch comedy television series In Living Color. His first leading roles in major productions came with Ace Ventura: Pet Detective (1994), Dumb and Dumber (1994), The Mask (1994), and Ace Ventura: When Nature Calls (1995), as well as a supporting role in Batman Forever (1995) and a lead role in Liar Liar (1997). He then starred in The Truman Show (1998) and Man on the Moon (1999), with each garnering him a Golden Globe Award for Best Actor. more…