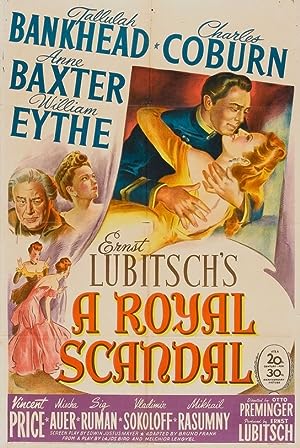 Synopsis: In 18th century Russia,a naive and idealistic lieutenant,Alexei Chernoff, deserts his unit and rushes to the Imperial Palace to warn Empress Catherine the Great of great dangers.Lieutenant Chernoff's fiancée,Countess Anna,is one of the ladies-in-waiting of the Empress.Upon forcing his way into the palace, lieutenant Chernoff meets Chancellor Nicolai Iiyitch who promises to convey Chernoff's warning to the Empress but Chernoff wants to meet the Empress in person.His fiancée is also surprised to see Chernoff inside the palace.When Chernoff finally meets the Empress,he's mesmerized by her personality and swears to give his life to protect her.Catherine is impressed by his sense of sacrifice,innocence,sincerity,loyalty and also by his good looks.Infatuated with him,she makes him her boy-toy,to Anna's dismay.Overnight,Chernoff is appointed Chief of the Imperial Guard and his rank is raised to captain,to major,to colonel,according to Empress Catherine's romantic mood.
Genre: Comedy, Drama, History
Director(s): Otto Preminger, Ernst Lubitsch
Actors: Tallulah Bankhead, Charles Coburn, Anne Baxter, William Eythe
Production: 20th Century Fox Film Corporation

- His Excellency wants to see you immediately.

- You know, Your Excellency,

Variatinsky has been taking everything

and some beautiful glassware.

- It was really a shame.

After all, Variatinsky's a primitive man.

And to throw all those lovely things at him,

I'm sure he didn't appreciate it.

Variatinsky actually talked back to Her Majesty.

Oh, then Her Majesty got really furious.

And she called him something.

A word I never heard of.

- So I looked it up in the dictionary.

- Then he called her something

which I couldn't even find in the dictionary.

Then words seemed to fail Her Majesty.

And she picked up that porcelain horseman...

- That monstrosity Frederick the Great gave her?

Good! Even in her most furious moments,

- That's nothing, Your Excellency!

- Don't say Variatinsky threw something back?

Worse. Suddenly he reached out

and gave Her Majesty a push.

And for the first time in the history of Russia,

an empress landed flat on her imperial back.

But now he made his greatest mistake.

Instead of standing by his guns,

and begged for Her Majesty's forgiveness.

Well, a moment later, he was out.

and he might have been tsar of all the Russias.

- He seems to have missed!

- Yes, he missed himself.

That man misses every opportunity.

Friends, brothers! How can we possibly fail?

Variatinsky is out. The position of

Command of the Palace Guard is vacant.

My nephew is here, with my influence.

- The Chancellor! That doddering old idiot!

But if he refuses to introduce your nephew

to the tsarina, what then?

Then I say to him,

"Look here, you know to whom you are talking?"

But if he will say

he does not know to whom he is talking?

Then I say to him,

"Look here, I am General Ronsky!

- That's enough. That should scare anybody.

And after he has introduced my nephew

to that woman on the throne...

I want to go back to the Ural Mountains.

Boris, beloved nephew of mine,

son of my favourite sister, Petrushka,

did I not give you my precious Arab steed

and that wolfhound dear to my heart?

Would I suggest to the blood of my own blood

anything that is not good for you?

How can you be so ungrateful, Boris Nikitin?

Who got you out of your little country house

in the Ural Mountains?

Who brought you here and paved your way

for one of the greatest careers in our country?

Command of the Palace Guard!

You know what that means?

You will have the whole guard at my disposal!

I beg your pardon, friends. At our disposal.

I know it's true

that I am the son of your favourite sister.

I appreciate that you have given me

and that wolfhound dear to your heart.

I know that I am blood of your blood.

But I want to go back to the Ural Mountains.

you ungrateful swine of a nephew!

I took you out of your stinking hut

in the Ural Mountains...

- But, Uncle, think of Variatinsky.

Edwin Justus Mayer (November 8, 1896 – September 11, 1960) was an American screenwriter. He wrote or co-wrote the screenplays for 47 films between 1927 and 1958. Edwin Justus Mayer worked on many screenplays but he is remembered now for his work with Ernst Lubitsch. He worked with Lubitsch on the scripts for To Be or Not to Be (1942) and A Royal Scandal (1945). A Royal Scandal (1945) did poorly at the box office, but is considered by many as one of Lubitsch's finest films. more…