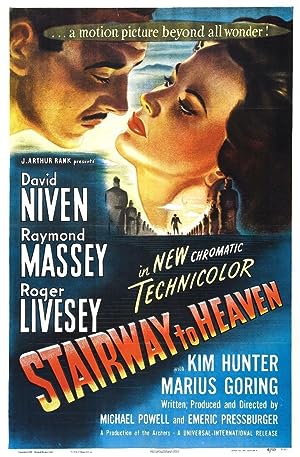 A Matter of Life and Death

Synopsis: Returning to England from a bombing run in May 1945, flyer Peter Carter's plane is damaged and his parachute ripped to shreds. He has his crew bail out safely, but figures it is curtains for himself. He gets on the radio, and talks to June, a young American woman working for the USAAF, and they are quite moved by each other's voices. Then he jumps, preferring this to burning up with his plane. He wakes up in the surf. It was his time to die, but there was a mixup in heaven. They couldn't find him in all that fog. By the time his "Conductor" catches up with him 20 hours later, Peter and June have met and fallen in love. This changes everything, and since it happened through no fault of his own, Peter figures that heaven owes him a second chance. Heaven agrees to a trial to decide his fate.
Genre: Comedy, Drama, Fantasy
Director(s): Michael Powell, Emeric Pressburger
Actors: David Niven, Kim Hunter, Robert Coote, Kathleen Byron
Production: Universal Pictures
1 win & 2 nominations.

This is the universe.

Thousands of suns, millions of stars,...

..separated by immense distances|and by thin floating clouds of gas.

The starlight makes the gas transparent.

Where there are no stars|it appears as dark, obscuring clouds...

Someone must've been messing about|with the uranium atom.

No, it's not our solar system,|I'm glad to say.

Ah, those are called|a globular cluster of stars.

Down here in the right-hand corner,...

..see that little chap|rather like a boy scout's badge?

It's a mass of gas expanding|at thousands of cubic miles a minute.

That point of fire is a burning city.

And here, rolling in over the Atlantic,...

I hope all our aircraft got home safely.

Listen to all the noises in the air.

(Churchill on radio)|"This was their finest hour. "

"Politics - Conservative by nature,|Labour by experience. "

Request your position.|Can you see our signals?

"Give me my scallop-shell of quiet,|My staff of faith to walk upon,...

..My scrip of joy, immortal diet,|My bottle of salvation,...

"I'd rather have written that|than flown through Hitler's legs. "

Hello, Lancaster. We are sending signals.|Can you see our signals?

But at my back I always hear|Time's wingd chariot hurrying near.

And yonder all before us lie|Deserts of vast eternity.

Andy Marvell. What a marvel!|What's your name?

Request your position.|Come in, Lancaster.

I can't give you my position.|Instruments gone, crew gone.

Except Bob, my sparks. He's dead.

They'll be sorry about Bob.|We liked him.

Are you going to try to land?|Do you want a fix?

Tell her that I love her.

You'll have to write this, but I want her|to know I love her very much.

.. but I've loved her always|right up to the end.

"Give my love to my two sisters, too.|Don't forget them. "

Michael Latham Powell (30 September 1905 – 19 February 1990) was an English film director, celebrated for his partnership with Emeric Pressburger. Through their production company "The Archers", they together wrote, produced and directed a series of classic British films, notably 49th Parallel (1941), The Life and Death of Colonel Blimp (1943), A Matter of Life and Death (1946, also called Stairway to Heaven), Black Narcissus (1947), The Red Shoes (1948), and The Tales of Hoffmann (1951). His later controversial 1960 film Peeping Tom, while today considered a classic, and a contender as the first "slasher", was so vilified on first release that his career was seriously damaged.Many film-makers such as Martin Scorsese, Francis Ford Coppola and George A. Romero have cited Powell as an influence. In 1981, he received the BAFTA Academy Fellowship Award along with his partner Pressburger, the highest honour the British Film Academy can give a filmmaker. more…

A Matter of Life and Death