Synopsis: In an England of the future, Alex (Malcolm McDowell) and his "Droogs" spend their nights getting high at the Korova Milkbar before embarking on "a little of the old ultraviolence," while jauntily warbling "Singin' in the Rain." After he's jailed for bludgeoning the Cat Lady to death, Alex submits to behavior modification technique to earn his freedom; he's conditioned to abhor violence. Returned to the world defenseless, Alex becomes the victim of his prior victims.
Genre: Crime, Drama, Sci-Fi
Actors: Malcolm McDowell, Patrick Magee, Michael Bates, Warren Clarke
Production: Warner Bros.
Nominated for 4 Oscars. Another 9 wins & 19 nominations.

Alex, Pete, Georgie and Dim, teenagers stoned on their milk-plus, their

feet resting on faces, crotches, lips of the sculptured furniture.

There was me, that is Alex, and my three droogs, that is Pete, Georgie

rassoodocks what to do with the evening. The Korova Milk Bar sold

were drinking. This would sharpen you up and make you ready for a bit

of the old ultra-violence. Our pockets were full of money so there was

no need on that score, but, as they say, money isn't everything.

A Tramp lying in tunnel, singing.

Where the girls are so pretty

I first set my eyes on sweet Molly Malone

As she wheeled her wheelbarrow

Through streets wide and narrow...

Shadows of the boys approaching fall across Tramp.

One thing I could never stand is to see a filthy, dirty old drunkie,

howling away at the filthy songs of his fathers and going blerp, blerp

guts. I could never stand to see anyone like that, whatever his age

The boys stop and applaud him.

Can you... can you spare some cutter, me brothers?

Alex rams his stick into the Tramp's stomach. The boys laugh.

Oh-hhh!!! Go on, do me in you bastard cowards. I don't want to live

Oh - and what's so stinking about it?

It's a stinking world because there's no law and order any more. It's a

done. It's no world for an old man any more. What sort of a world is it

at all? Men on the moon and men spinning around the earth and there's

not no attention paid to earthly law and order no more.

Oh dear land, I fought for thee and brought you peace and victory.

Alex and gang move in and start beating up on old Tramp.

Billyboy gang on stage tearing clothes off a screaming Girl.

his four droogs. They were getting ready to perform a little of the old

in-out, in-out on a weepy young devotchka they had there.

Alex and gang step out of the shadows.

How are thou, thou globby bottle of cheap stinking chip oil? Come and

get one in the yarbles, if you have any yarbles, you eunuch jelly thou.

Alex and the boys rush out of casino.

Swerving car, forcing other cars off the road, trying to hit

The Durango-95 purred away real horrorshow - a nice, warm vibraty

feeling all through your guttiwuts. Soon it was trees and dark, my

brothers, with real country dark. We fillied around for a while with

other travelers of the night, playing hogs of the road. Then we headed

west, what we were after now was the old surprise visit, that was a

real kick and good for laughs and lashing of the ultra-violent.

A cottage on its own, on outskirts of a village.

Alex shushes his giggling boys and gets out of the car. 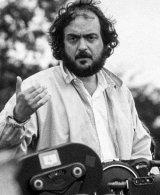 Stanley Kubrick was born in Manhattan, New York City, to Sadie Gertrude (Perveler) and Jacob Leonard Kubrick, a physician. His family were Jewish immigrants (from Austria, Romania, and Russia). Stanley was considered intelligent, despite poor grades at school. Hoping that a change of scenery would produce better academic performance, Kubrick's father sent him in 1940 to Pasadena, California, to stay with his uncle, Martin Perveler. Returning to the Bronx in 1941 for his last year of grammar school, there seemed to be little change in his attitude or his results. Hoping to find something to interest his son, Jack introduced Stanley to chess, with the desired result. Kubrick took to the game passionately, and quickly became a skilled player. Chess would become an important device for Kubrick in later years, often as a tool for dealing with recalcitrant actors, but also as an artistic motif in his films. more…