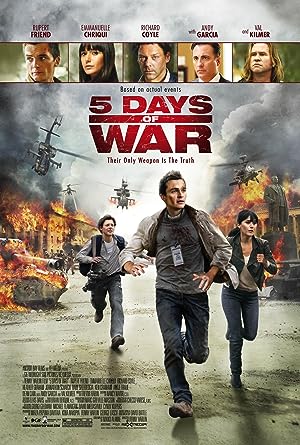 Based on actual events

More than 500 war reporters|were killed in the last decade.

This film is dedicated to their memory.

He can't talk, so he just films things.

He's even named his camera Dave,|which I find kind of sad.

Say hello to the folks at home.

Say, "Greetings from hell."|Come on, guys.

What are you doing back there?|Planning a date?

We're speculating about al-Safi's|motives on giving us this interview.

Sebastian, you are|such a fucking pervert!

Why don't you turn that off, and|save the battery for the real stuff?

- Yeah, stop filming us!|- This is the real stuff.

They need something juicy|to break away from "American Idol".

Anders, would you care to explain|that concept to TV audiences?

Why don't you explain it?

You can explain the emergency|sex you have at night,

alone with the internet, you know.

Cos we don't want our sex lives|on your emergency sex show.

Whoa there, missy!|Did you just say, "Our sex lives"?

Ah, does that mean you guys|are finally doing it?

When we get home we're gonna have a talk

about your lack|of journalistic standards, OK?

Get this car in reverse!

Back off! Get us out of here! Press!

Put the car in reverse!

Move it, motherfucker,|or we're all dead!

Get us the f*ck out of here!

She's been hit through the side!|She's bleeding pretty bad!

Get us the f*ck out of here!

We're gonna get you out of here, OK?|Just stay with me!

Hey, you have to help her first, OK?

- Where are you guys from?|- Georgia! Coalition forces!

This saved my life once.

has continued to escalate,

to peace in our region.

where violence harms everyone.

and the people of Georgia,

let's return to the negotiating table.

his country closer to the West.

in Iraq and Afghanistan,

in both NATO and the EU.

aspiration to integrate with the West

of the Soviet Union,

catastrophe of the 20th century.

So, what's going on?

There's no one here.

but me Zoe and Stilton.

a police truck, got lit up.

under fire on the border.

backed by the Russians.

Both sides have had peacekeepers here

I got a special reputation|after Iraq and...

Apparently, I was a loose cannon before.

Listen, I don't care what you do.

and get over here.

I will dance for you!

Then again most places do|before war tears 'em up.

In the end they all look the same.|And the world barely blinks.

We're doing our best to make sure our content is useful, accurate and safe.
If by any chance you spot an inappropriate comment within your search results please use this form to let us know, and we'll take care of it shortly.