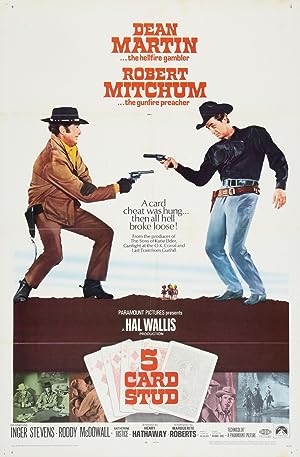 Synopsis: After a card shark is caught cheating, he is taken out and lynched by the drunkards he was playing against. Soon afterwards, the men who were in the lynch mob start being murdered, one after another; all by hanging, strangling, or smothering. Who will be killed next and who is responsible? Is it one of the original party seeking to cover their accursed deed, or perhaps the mysterious Rev. Jonathan Rudd, who has recently arrived in town?
Genre: Mystery, Romance, Western
Director(s): Henry Hathaway
Actors: Dean Martin, Robert Mitchum, Inger Stevens, Roddy McDowall
Production: Paramount Pictures

Deal me out.|I'll be back for the next turn.

...when I deal, I like to start|with all fifty-two cards.

There's only one thing worse|than a crook, that's a clumsy crook.

Keep the money,|just give me my horse.

- Who was shooting?|- It turned into a hanging party.

You kick a cheat out of town,|not lynch him.

What the hell are you doing?

Hey, George.|Wake up and get out here.

Get him up to his room. Let me know|if he needs anything, except brains.

How come you didn't hear|when they dumped me there?

No questions about last night?

I knew what was gonna happen,|and it did.

They weren't just five men, they|were a mob. I tried to stop them.

When a gambler lets his game|wind up in a killing,

pretty soon he don't have a game.

You know anything about this?

Was there a game downstairs|after I closed up last night?

Maybe you're right at that.

You know, I always wanted|to bust into that glass

to find out what your hole card was.

What do you think it was?

I think you had your royal flush.

So did the other man.|But he folded, so he never found out.

- Where you heading?|- Anywhere, to leave this place behind.

But first I got to deliver a message.

- Finish packing for me?|- All right.

Stoney, Mace. How are you feeling?

I'd say come and visit me,|but I know better.

What are you doing out in the sun?|You sleep all day.

You're always coming or going.|When will you decide to stay?

People who stay have no place to go.|Where's your brother?

If you're going to say|goodbye again, say it.

That was one wore-out,|no-account kiss.

Fine, but you wasted it.|I don't plan to come back this time.

It wasn't wasted.|You enjoyed it. And you'll be back.

Nora, you're the most foolish thing|in the world, a good woman.

She'll push herself up against|a man till he forgets she's good.

- Then she expects marriage.|- How else would she end up?

With me she could end up|picking hay from her dress.

Don't gamble on my better instincts.|I don't have any.

I just have instincts.

Nick! Van wants to see you.

From up here, just about right.

You two have been fighting|each other for years.

What's your reason this time?

We don't need a reason.

Do you think about|that card player much?

Just all the time.

Big mistake,|getting wound up with a gambler.

- You gamble right along with him.|- But not for a living.

What do you do for a living?|Sit around till you own the ranch?

Only half of it.|The other half will go to you.

You're not worried about me,|just about yourself.

If Van was my husband,|you couldn't run him. He'd run you.

No way.|I've had a gutful of that from Dad.

You could get along better with Dad|if you tried. And with Van, and everybody.

Why don't they try|to get along with me?

- Any news on the hanging?|- Nothing to hang anybody with.

Marguerite Roberts (21 September 1905 – 17 February 1989) was an American screenwriter, one of the highest paid in the 1930s. After she and her husband John Sanford refused to testify in 1951 before the House Un-American Activities Committee, she was blacklisted for nine years and unable to get work in Hollywood. She was hired again in 1962 by Columbia Pictures. more…