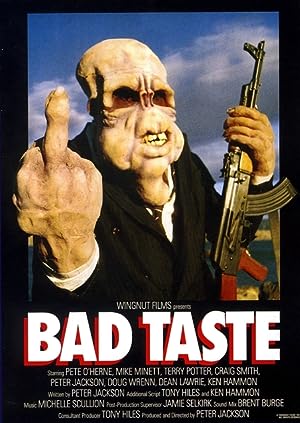 Synopsis: Derek and his friends must investigate the missing people in a small village. Then they find out its human formed aliens that are really big headed monsters that used all the people in the small village into their snack burgers. Now, Derek must save the day and the world with his chainsaw before the meat eaters strikes the whole planet. Will Derek kill all the aliens?
Genre: Comedy, Horror, Sci-Fi
Director(s): Peter Jackson
Actors: Terry Potter, Pete O'Herne, Craig Smith, Mike Minett
Production: WingNut Films
1 win & 1 nomination.

Barry shot his head off.|He had the magnum.

I knew it was a mistake|to issue weapons.

Wish they change that name!

Due to the potentially|dangerous hazards involved...

All right, at least you managed|to convince the minister.

Aren't you interested|in this joker we caught then?

Stay where you are and I'll give you|an eye-witness description...

of this inter-galactic wanker.

Well, I would describe him|as sort of human-shaped.

He's got jeans|and a blue shirt on.

Yeah, but there's something|strange about him though.

It is a bloody farmer!

Is this another false alarm like the|Manners Street Invasion Alert?

How do you explain the disappearance|of an entire township then, Frank?

The Kiwi Jonestown,|of course, that's it.

Yeah, yeah, OK.|Derek, just do me one favour.

Try not to make him extinct|before we get there. Out!

Christ, what a dork!|How the hell did he get in this team?

Well, this has buggered your plans|for conquering the universe?

My friend, the astro-bastard.|Time for talkies.

By the time my colleagues|get here...

I want to have you babbling|in some extra-terrestrial language.

I could always encourage you|by hammering this cold steel...

It'll sure poke a nasty hole|in your marrow, mate.

We'll get the old ball rolling?

Now, what are you dirty hooers|doing on my planet?

Sir Peter Robert Jackson (born 31 October 1961) is a New Zealand film director, screenwriter and film producer. He is best known as the director, writer, and producer of The Lord of the Rings trilogy (2001–03) and The Hobbit trilogy (2012–14), both of which are adapted from the novels of the same name by J. R. R. Tolkien. Other films include the critically lauded drama Heavenly Creatures (1994), the mockumentary film Forgotten Silver (1995), the horror comedy The Frighteners (1996), the epic monster remake film King Kong (2005), and the supernatural drama film The Lovely Bones (2009). He produced District 9 (2009), The Adventures of Tintin: The Secret of the Unicorn (2011), West of Memphis (2012) and Mortal Engines (2018). Jackson began his career with the "splatstick" horror comedy Bad Taste (1987) and the black comedy Meet the Feebles (1989) before filming the zombie comedy Braindead (1992). He shared a nomination for Academy Award for Best Original Screenplay with his partner Fran Walsh for Heavenly Creatures, which brought him to mainstream prominence in the film industry. Jackson has been awarded three Academy Awards in his career, including the award for Best Director in 2004. He has also received a Golden Globe, four Saturn Awards and three BAFTAs amongst others. His production company is Wingnut Films, and his most regular collaborators are co-writers and producers Walsh and Philippa Boyens. Jackson was made a Companion of the New Zealand Order of Merit in 2002. He was later knighted (as a Knight Companion of the New Zealand Order of Merit) by Anand Satyanand, the Governor-General of New Zealand, at a ceremony in Wellington in April 2010. In December 2014, Jackson was awarded a star on the Hollywood Walk of Fame. more…