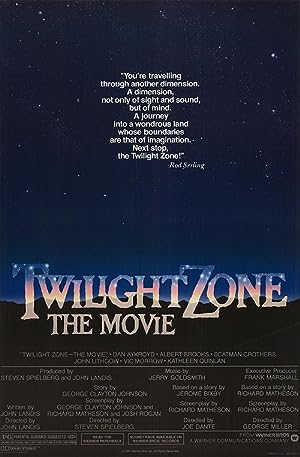 This thing's brand-new. -How about the radio?

DRlVER:
Radio doesn't work. You can't get anything out here.

Damn it! Well, guess we just have to

-Yeah. lmagine not running out of gas.

We have plenty of gas, all right? -Yeah.

-Oh, my God. What are those gravel beds up ahead? They're gonna fly up

and knock out our lights. Uh-oh. PASSENGER: Hey, come on.

DRlVER:
Blackness. Oh, my goodness. Why, there could be nuns ahead.

We wouldn't even see them. lsn't this amazing? Look. PASSENGER:

l don't know whether it's too safe-- DRlVER: l used to play chicken

and see how far we could drive... . ..without someone going, "Stop." PASSENGER:

Who's chicken, huh? -ls that a bear up there, huh?

Oh, my goodness. lt looks like they're out permanently

this time. Ha, ha, ha. PASSENGER: This is dangerous.

DRlVER:
No, the road's straight. lt's kind of scary.

What is that up ahead? PASSENGER:

PASSENGER:
Sure. -You know how to play?

Fred Gwynne was in it -Beverly Hillbillies.

-That's it. -Thanks for the Fred Gwynne.

He looks like an old ape -What is it?

It could be worth a bucks -What is it?

This must be where they live Look at that city, let's continue to dig -What is it?

National Geographic. Okay, all right. -Okay, l got one for you.

Sounds like it was on CBS. l don't know. DRlVER: Give me a hint.

DRlVER:
Book him, Danno. Book him. One more hint.

What was its locale? PASSENGER: Surfboards.

An island in the Pacific Ocean -Gilligan's Island.

with Burgess Meredith? Remember? He loved to read. And there was a nuclear war

and he had no friends. -He's in the library--

-Oh, with the glasses. Yes. He was the last man,

he broke his glasses. -Yeah.

-Freaked me out. When l was 7, l bought another pair

John David Landis is an American film director, screenwriter, actor, and producer. He is known for his comedy films, his horror films, and his music videos with Michael Jackson. more…